Protesters waved Turkish, Turkish Cypriot and Egyptian flags as they marched through the TRNC capital Lefkosa (Nicosia) on Friday. 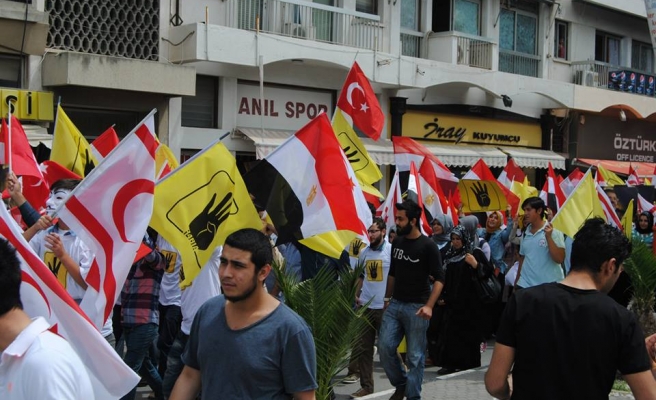 Dozens of Turkish Cypriots in the Turkish Republic of Northern Cyprus (TRNC) marched through the capital Lefkosa (Nicosia) on Friday to protest against the death penalties handed down to 529 anti-coup activists in Egypt.

Organized by the Universal Love and Brotherhood Association (ESKAD), Turkish Cypriot protesters took to the streets shortly after Friday midday prayers where they gathered in front of the Ottoman Mevlevi lodge waving Turkish, Turkish Cypriot and Egyptian flags.

Protesters also held up pictures of Egypt's first elected president Mohamed Morsi, who was ousted by a military coup on July 3 last year. Many also sported t-shirts and banners displaying the famous Rabia sign in respect and remembrance of the hundreds of anti-coup protesters massacred by the Egyptian army last August in Cairo's Rabia al-Adawiyyah Square.

Speaking to reporters, ESKAD spokesman Cagatay Ozdem slammed the death sentences which were issued to the 529 defendants in a 20 minute hearing.

"The death penalties handed down to 529 Egyptians in a court case which only lasted 20 minutes is a crime against humanity. It is very clear that this court ruling has been given under the orders of the military junta, which carried out a coup on July 3rd, last year," he said.

"In theRabia al-Adawiyyah Square, civilians were shot with automatic guns. While hundreds of people were being killed, the killing of one police officer resulted in the death penalty being given to 529 people. The only crime of these people was the fact that they were protesting against a military coup in the Rabia Adawiyya Square," he added.

The group also criticized the West for its support and/or lack of condemnation against the coup regime led by Field Marshal Abdel-Fattah al-Sisi, who is the favorite to win Egypt's upcoming presidential election against his only rival left-winger Hamdeen Sabahi.

"What is happening is a reflection of the racist, imperialist world order which seeks to drain the world of its energy resources, enslave subjected peoples and punish those who disobey. The execution verdicts handed down to these 529 people is an attack on the independence of the people in the region," Ozdem said, adding that the executions would only spread more instability in Egypt.

The ESKAD spokesman then concluded his speech calling on the international community to put pressure on Egypt to respect human rights and inviting non-governmental organizations to take their concerns to the international arena.

" These abuses will not be stopped until a new world is formed in which truth is upheld. It is up to each and every one of us to stand against the oppressors side by side with the oppressed," he said