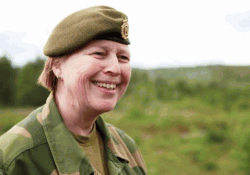 UNFICYP’s Force Commander, Major General Kristin Lund she said that it is important for the Greek Cypriot Chief of the National Guard, Lieutenant General Georgios Basiakoulis and the commander of the Turkish Military Forces, Major General Ilyas Bozkurt come together and talk.

In an interview with Emine Davut Yitmen of Kibris Newspaper, she said that they should work for increasing trust among them.

“My personal view is that instead of having messengers among us, it would be better if the commanders talked to each other. This is important”, said Major General Lund.

Lund also added that as it is not possible to change the past events it is now important to look forward. Lund gave Balkans as an example for Cyprus where Croats, Serbs and Bosnians are now working together with UNFICYP to build a future.

“The peace efforts should not be limited with the politicians. People from both communities should join bi-communal events without prejudices” said Lund.

Asked whether she visited the ghost town Maras (Varosha), Lund said: “Going to the fenced off Varosha was deeply saddening. That place remained closed for years. They have to decide what they will do. Going there is very dangerous. Therefore they need a special plan. I do not know whether the buildings will be demolished, new road systems will be built and buildings will be reconstructed. However, first it should be decided who possess what”.

Major General Kristin Lund of Norway officially assumed her duties as Force Commander of the United Nations Peacekeeping Force in Cyprus (UNFICYP) in August, taking over from Major General Chao Liu of China.