US urged to convince Greek Cypriots for talks 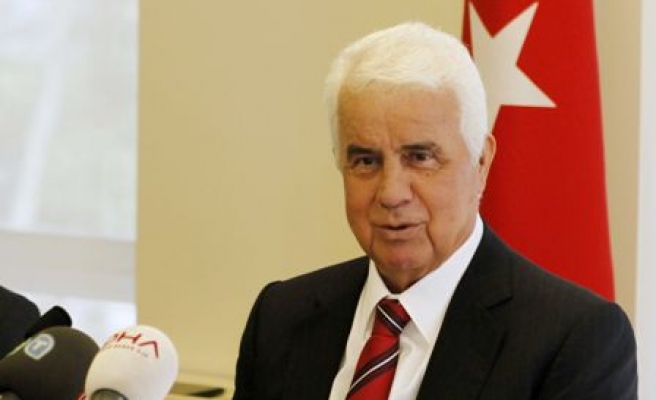 The President of the Turkish Republic of Northern Cyprus, Dervis Eroglu, has sent a letter to U.S. Vice President Joe Biden, urging him to convince the Greek-Cypriot leader, Nicos Anastasiadis, to resume negotiations.

According to a statement issued by the president’s office Monday, Eroglu called on the Greek-Cypriot side to return to the negotiating table unconditionally.

The letter comes after the Greek-Cypriot administration suspended talks in October in retaliation for Turkey’s warship mission to monitor an oil-and-gas exploration activity in the Cyprus coast.

Eroglu termed the tension in the region as artificial, which served the Greek-Cypriot administration's political aims.

"The Turkish Navy vessels are in international waters," Eroglu said in the letter.

Turkey and the Turkish-Cypriot government have strongly opposed any unilateral move by the Greek-Cypriot administration to explore any hydrocarbon resources around the island, saying that its natural resources should be exploited in a fair manner under a united Cyprus.

Negotiations between Turkish and Greek Cypriots resumed after a two-year pause in February 2013. The previous round of talks collapsed partly because of the Eurozone debt crisis impact on the government in Lefkosa.

However, the Greek-Cypriot administration suspended the most recent talks on October 7 after Turkey sent a ship to monitor an oil-and-gas exploration mission off the Cyprus coast.

In 1974, an attempt was made by Greek Cypriots to forcibly join the island to Athens through “enosis,” or union, via a coup attempt. This was resisted by an armed Turkish peace mission in accordance with the 1960 Treaty of Guarantee. Consequently, Turkish Cypriots set up their own state in the north of the island in 1983, recognized by Turkey, while continuing the search for reconciliation.

The European Union recognizes the Greek-Cypriot administration on the island.