Erdogan met Obama in New York after Clinton urged Turkey on Monday not to do anything to worsen its relationship with Israel. 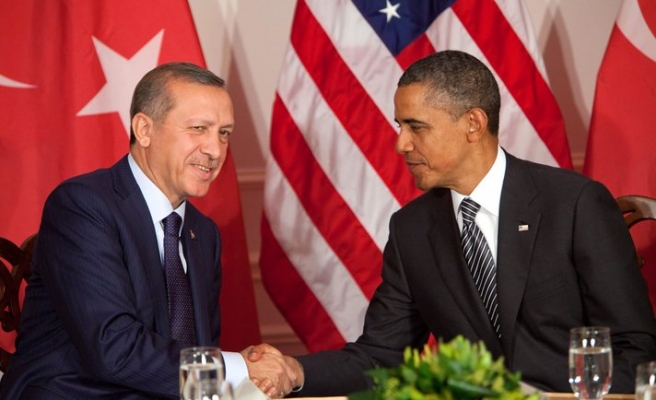 Erdogan met U.S. President Barack Obama on the sidelines of the 66th session of General Assembly in New York after Secretary of State Hillary Clinton urged Turkey on Monday not to do anything to worsen its relationship with Israel.

Ties between Turkey and Israel have deteriorated rapidly over Israel's 2010 killing of Turkish activists in a Gaza-bound aid convoy. The crisis has underscored Israel's growing isolation and the new limits of U.S. influence in the Middle East.

"The president underscored his interest in seeing a resolution of that issue between those two countries and encouraged continuing work toward that end," White House adviser Liz Sherwood-Randall told reporters after the meeting, saying Obama also emphasized the need to calm tensions throughout the region.

Erdogan has said that Israel's attitude was unacceptable.

"The United States is aware of Turkey's rightfulness. I reminded President Obama the United Nations decisions. The International community did not put pressure on Israel. If Israel had been imposed some sanctions, we could have come to a different conclusion. For instance, we were able to talk to former Israeli Prime Minister Ehud Olmert. Now, there is no chance to come together. They do not have such an intention. They indirectly made some demands and took several steps. But they did not make a formal apology. Israel's attitude is unacceptable," he said at a news conference following his meeting with President Obama.

"I reiterated Turkey's determination to maintain its stance about Israel. Our relations will not back to normal unless Israel apologizes, pays compensation to relatives of the victims and lifts embargoes on Gaza," he said.

"The United Nations recognized Palestinian state in 1947. But, any step have not been taken since then. Now, this mistake should be corrected. We are going to support the Palestinian state. I hope that the United States will extend the necessary support to this end," Prime Minister Erdogan added.

Israeli-Turkish relations have spiraled downward in recent weeks with the release of a U.N. report on the 2010 flotilla raid, in which Israeli commandos raid killed nine Turkish activists, and Israel's refusal to apologize to Ankara.

In the face of no steps from Israel, Erdogan has also kept up a stream of harsh rhetoric against Israel, using a tour of Arab states last week to support a Palestinian bid for statehood at the United Nations and chide Israel as a spoiled client of the West.