Azerbaijan may complete gas talks with Turkey by Sept 26

Azerbaijan is negotiating to sell Ankara 6 billion cubic metres (bcm) of gas per year from the second phase of the giant Shah Deniz field and to ship 10 bcm to European customers via Turkey. 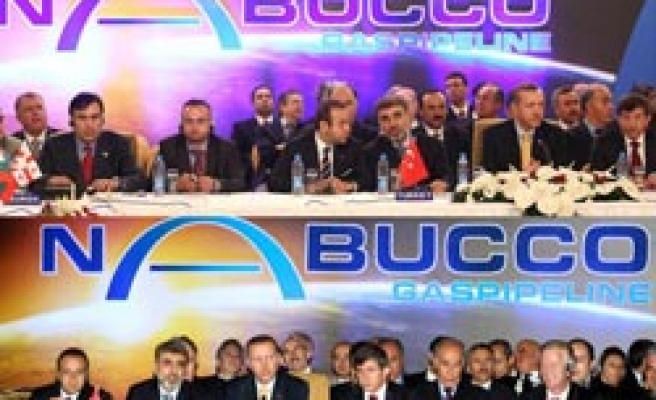 Azerbaijan said it may complete gas transit talks with Turkey to ship exports from its Shah Deniz field to Europe by Sept. 26 and sign a final deal in October, giving a potential boost to the European Union's Nabucco pipeline plans.

"We expect to complete talks with Turkey before Sept. 26...Turkey will be a customer of some amount of gas as well as a transit territory to ship gas to Western Europe," Vagif Aliyev, the head of Azeri state energy firm SOCAR's investment department, told reporters.

Azerbaijan is negotiating to sell Ankara 6 billion cubic metres (bcm) of gas per year from the second phase of the giant Shah Deniz field and to ship 10 bcm to European customers via Turkey.

Talks were resumed with the visit of Turkish Prime Minister Tayyip Erdogan to Baku at the end of July, after breaking off during parliamentary elections in Turkey.

The EU-backed Nabucco is one of three pipeline projects bidding for Azerbaijan to supply 10 bcm of gas per year to be pumped directly to Europe, bypassing Russia.

SOCAR's president said on Tuesday the final deal might be signed during Azeri President Ilham Aliyev's official visit to Turkey in October.

"It's not ruled out that signing of this package will take place in Turkey in October," Rovnag Abdullayev told reporters.

The 27-member bloc announced last week that it had agreed to negotiate a treaty with Azerbaijan and Turkmenistan to bring natural gas from the world's fourth-largest reserves across the Caspian Sea to Europe.

But the European pipeline faces competition for Azeri gas from the Interconnector Turkey-Greece-Italy (ITGI) and the Trans Adriatic Pipeline (TAP).

All three consortiums had already submitted their final commercial proposals to SOCAR.

The Shah Deniz field is being developed by BP and Statoil as well as SOCAR and several others. It is estimated to contain 1.2 trillion cubic metres of gas.

Production began in 2006 and the second phase is expected to come onstream by 2017. Azerbaijan has been in talks with more 20 companies and consortiums looking to buy gas from Shah Deniz II.