Barzani to PKK: fight in Turkish Parliament, not in Kandil

Barzani this week also condemned the shelling by Turkish warplanes, which killed seven Iraqis, as residents of the semi-autonomous northern area protested against the attacks. 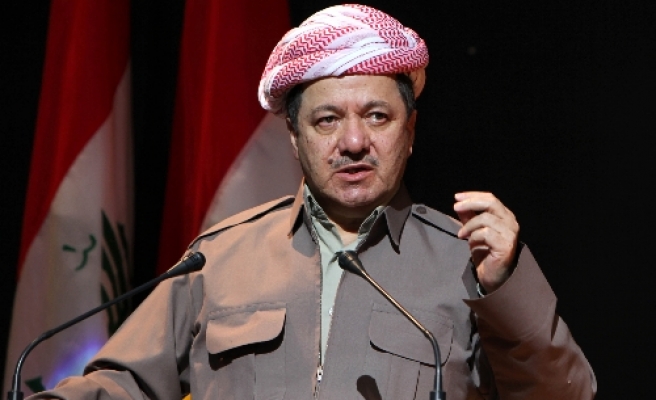 Expressing a strong uneasiness with the presence of PKK bases in the Kandil Mountains of northern Iraq, the president of Iraq's Kurdish region has called on PKK members to lay down their arms and get involved in politics instead to save its cause.

"My conviction is that Kurds should fight for their cause in Parliament. This is 100 times more effective and better than killing 10 soldiers. We are against the politics of death. In my opinion, the PKK's killing of Turkish soldiers is a big mistake.

This is not serving the Kurdish cause. Go and make your war in Parliament," Kurdish President Massoud Barzani was quoted as saying in remarks delivered to the Kurdish language www.nefel.com earlier this week.

Barzani this week also condemned the shelling by Turkish warplanes, which killed seven Iraqis, as residents of the semi-autonomous northern area protested against the attacks.

"Turkish warplanes are shelling some areas of Kurdistan, and as a result of the shelling on Sunday, Aug. 21, 2011, seven civilian citizens were martyred. At this time I want to express my concern about the martyring of those civilians and condemn [the shelling]. The killing and harming of civilians is unjustified," he said.

In Baghdad, Iraqi Foreign Minister Hoshyar Zebari said on Tuesday that his government condemns both the Turkish and Iranian attacks along the border.

Turkey's military said on Tuesday that air strikes on suspected PKK targets in northern Iraq this week have killed an estimated 90 to 100 militants and warned that it would press ahead withensives against the militant group both inside Turkey and across the border.

The Iranian government also has been shelling PKK and Party for a Free Life in Kurdistan (PJAK) targets along its section of the border.

"The government condemns and denounces all attacks and violations of the sovereignty of Iraq by neighboring countries," Zebari said. "We do not believe that this is the best way of solving this issue."

"We know that the PKK and the PJAK are not different from each other. The PKK doesn't listen to us. We don't have any intention to take sides in this fight. Because we don't want Kurds to fight with each other," he said.

A report posted by Reuters from northern Iraq on Wednesday, meanwhile, suggested that along the Iraqi northern Kurdish region's borders with Iran and Turkey, hundreds of refugees have fled since mid-July to small camps to escape attacks by Iraq's neighbors on the PKK and the PJAK.

Since mid-July when Iran began shelling, farmers abandoned crops and livestock for small refugee camps on the parched hillsides at the foot of the Kandil Mountains where Turkish jets now fly low across the frontier, Reuters said.