The Brazilian foreign minister said that Turkey and Brazil had confidence in the Tehran agreement regarding Iran's nuclear program controversy. 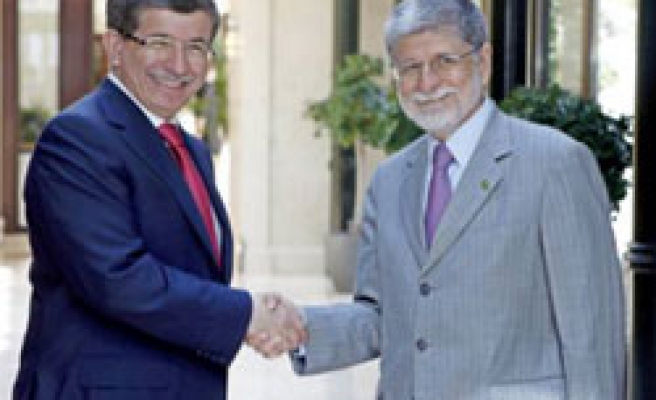 The Brazilian foreign minister said on Sunday that Turkey and Brazil had confidence in the Tehran agreement regarding Iran's nuclear program controversy.

Brazil's minister Celso Amorim said Turkey and Brazil had contributed to the Tehran Agreement, and their goal was to restore peace.

"We are trying to create a new world order," Amorim told a joint press conference with Turkish Foreign Minister Ahmet Davutoglu in Istanbul.

Davutoglu and Amorim met at a breakfast at Istanbul's Four Seasons Bosphorus Hotel earlier on Sunday to discuss bilateral relations and developments in the Middle East.

"Solving this global issue is for the best interests of every one," Amorim said.

Amorim said what Turkey and Brazil were doing was to contribute to world peace, and find a peaceful solution to problems.

The only thing two countries could do to resolve the dispute was to bring the concerned parties together, Amorim said.

Amorim said Brazil wanted Iran to assume a flexible attitude and attend a meeting with the Vienna Group.

The Brazilian foreign minister said he was supporting Iran's using nuclear energy for peaceful means, however Iran had to assure every one that this nuclear program would not have any military reflections.

Referring to his tour to the Middle East, Amorim said he did not want to go on that tour without consulting to his Turkish counterpart Davutoglu.

The Brazilian minister said he would meet Syrian President Bashar al-Asad in the coming week.

On bilateral relations, Amorim said two countries had developed a close partnership, which he defined as almost a strategic partnership.

Turkey and Brazil had similar foreign policies although they were situated in different geographical and geopolitic locations, Amorim said.