Turkish Prime Minister Recep Tayyip Erdogan has said that Turkey-Israel relations had been broken because of the tension escalated by Israel itself. 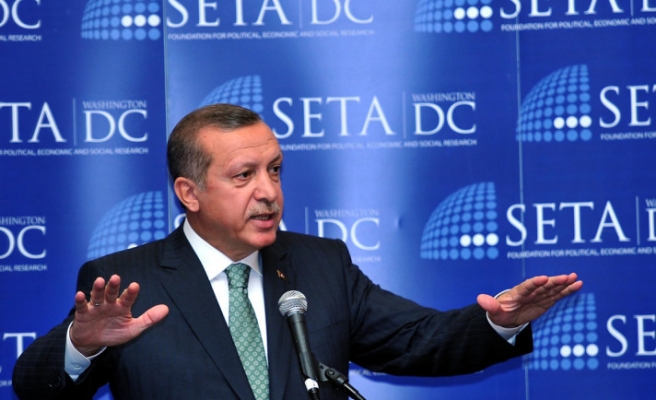 Turkish Prime Minister Recep Tayyip Erdogan has said that Turkey-Israel relations had been broken because of the tension escalated by Israel itself.

In a televised interview with the Fareed Zakaria of the CNN International, Prime Minister Erdogan said, "Turkey-Israel relations have been broken because of the tension escalated by Israel itself which began with Israeli raid on a flotilla carrying humanitarian aid to Gaza. In the attack nine Turkish people were killed, and one of them was an American citizen. And the American citizen's rights were not defended by the United States. Since to this date, no serious attitudes have been adopted against Israel for the loss of lives there."

"In fact, democracy, rights and freedoms should be defended at any case. We gave our warnings to Israel. Actually, this is the reason for war. This is something you cannot do in the international waters. But as a great state, we have been very forgiving. That is why we were very patient. We demanded them to apologize, pay compensation and eliminate the embargo on Gaza once and for all. If these demands are not met, the relations between Turkey and Israel will never become normal again. We have got nothing against the people of Israel, but against the attitude of the government of Israel," he said.

Replying to a question about Syria, Prime Minister Erdogan said, "we act on several principles. Those principles determine our relations. We can be friends. But you lose your position when you violate democracy, rights and freedoms. This is what happened with Syria. We lost our patience. No administration can stand in the way of the might and will of the people. In the end, Syrian people will make the final decision like the people in Egypt, Tunisia and Libya."

Referring to deployment of NATO's anti-missile radar in Turkey, Prime Minister Erdogan said, "Turkey will never allow any attack against Iran from its territories."

Replying to a question about Turkey's foreign policy, Prime Minister Erdogan said, "our world is fed up with wars. We do not want a world in which trillions of dollars are spent on defense industry. Spanish Prime Minister Jose Luis Rodriguez and I are still co-chairing the initiative of Alliance of Civilizations. Everything the Western world does is not necessary and right. We work to adopt the science of the West, we work to adopt whatever has been developed in the West and whatever is beautiful in the West. But let's not forget that there are really beautiful things in the East as well. Do not leave the eastern part of the world aside."

"Personally, U.S. President Barack Obama is someone I really like. And I want him to be much more successful in his policies and implementations. When he assumed the office, there was huge economic difficulty on his shoulders. If he had resolved those economic difficulties, he would have been much more relieved today. And at that point, in the general elections that are going to be held about 400 days from now, I wish him the best of luck because I had the chance to get to know him better," Prime Minister Erdogan said about his relations with the president.

"For the strategic and model partnership, Turkey and the United States have taken relations to a much higher level," he added.