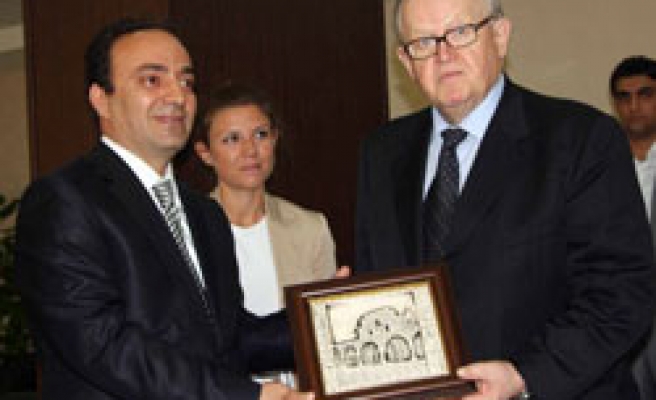 Members of Independent Commission on Turkey, publicly known as "Elders", paid a visit to Osman Baydemir, Mayor of manly Kurdish populated province of Diyarbakir on Wednesday.

The Independent Commission, established to extend support to Turkey's European Union (EU) bid, was comprised of a group of distinguished European policymakers.

Martti Ahtisaari is the chairman of the Commission. Albert Rohan is rapporteur. The British Council is supporting the Independent Commission in partnership with the Open Society Foundation Turkey.

Speaking at the meeting with Baydemir, Ahtisaari said Turkey gained candidacy status to EU in 1999, during the rotating presidency of Finland, noting that as the Independent Commission they had released two reports so far one in 2004 and the other in 2009.

Ahtisaari said in the report they recommended that Turkey should launch negotiations as it had fulfilled the criteria on the issue, adding Turkey started negotiations a short time after the release of the report.

Ahtisaari said in the second report they mainly relayed the message that Turkey should be treated under the same status with the other candidate countries aiming to become EU member.

He said the commission wanted to meet with the government officials as well as the NGOs after the referendum, noting that, "we did not want to limit the visits only with big cities like Ankara and Istanbul. We also wanted to visit Diyarbakir. I hope our visits to other provinces of Turkey will continue."

Ahtisaari underlined that the commission would do its best for Turkey to be treated equally with the countries which had earlier become EU members.

Baydemir, who also spoke at the meeting, stated that he hoped Turkey would become an EU member and be included in the EU process.