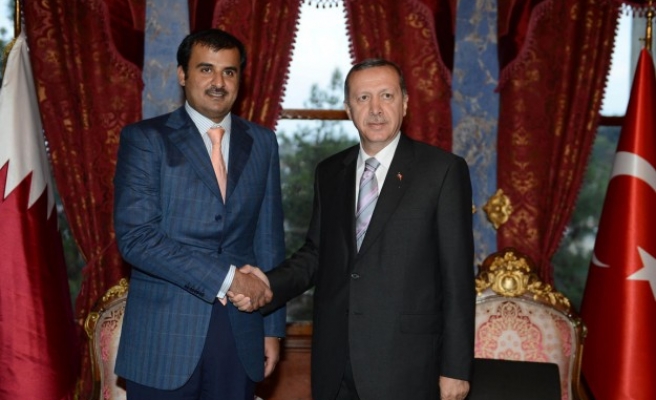 Prime Minister Recep Tayyip Erdoğan was scheduled to have a tête-à-tête meeting with new Qatari Emir Tamim bin Hamad Al Thani on Friday in İstanbul to discuss the latest developments in the region, particularly with regard to the situation in Syria and Egypt, Turkish diplomatic sources have said. This is the emir's first visit to Turkey since he came to power. Former Qatari Emir Sheikh Hamad bin Khalifa Al Thani unexpectedly abdicated in favor of his son Crown Prince Sheikh Tamim in late June.

The visit comes amid the Syrian crisis that is dominating the international agenda. Turkey and Qatar have adopted a similar stance regarding the Syrian conflict in the diplomatic sphere. They are the two countries most staunchly seeking the fall of President Bashar al-Assad's regime in Syria. Both countries have previously hosted a series of meetings to find a solution to the crisis.

Damascus accuses foreign powers -- including Qatar, Saudi Arabia and neighboring Turkey -- of supporting Syrian opposition forces struggling to topple Assad and of destroying stability in Syria and meddling in its internal affairs.

Sheikh Hamad's resignation was an unusual incident in the Arab world, and within days of Sheikh Tamim taking power, former ally Egyptian President Mohammad Morsi was overthrown by military forces in early July.

Cairo's relations with Qatar and Turkey deteriorated after the Egyptian army deposed Morsi. Qatar, along with Turkey, had given strong financial and diplomatic support to Morsi's government.

Qatar and Turkey have been key supporters of the new governments that rose to power in countries that witnessed the Arab Spring. Among the wealthy Gulf Arab states, only Qatar has close ties with the Muslim Brotherhood (MB), which emerged as Egypt's most potent political force following a popular uprising in February 2011. Sheikh Hamad was the first head of state to enter the blockaded Gaza Strip, in a high-profile visit that broke the isolation of Hamas, which had seized power in 2007.

According to diplomatic sources, besides Syria and Egypt, bilateral relations between the two countries and opportunities to boost cooperation in the economic field are also expected to be discussed during the meeting between the two leaders.