The two leaders agreed to convene again in New York on the sidelines of UN General Assembly summit later this month. 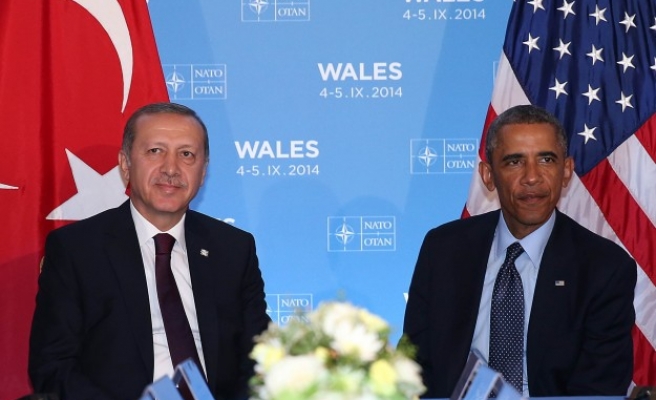 Turkish President Recep Tayyip Erdogan and U.S. President Barack Obama discussed the need for establishing an all-embracing government in Iraq and a political transition in Syria to scale down the crisis in the Middle East on Friday, Turkish presidential sources have said.

On the sidelines of a high-level NATO summit Friday, Erdogan and Obama also agreed to contribute to realization of a permanent ceasefire in Palestine.

When he met Turkish President Tayyip Erdogan in Newport, Obama told reporters: "I want to express my appreciation for the cooperation between U.S. and Turkish both military and intelligence services in dealing with the issue of foreign fighters, an area where we still have more work to do."

In remarks to press while flying to Cardiff on Wednesday for the NATO summit, Erdogan said he would ask Obama for the deportation or extradition of US-based congregation leader Fethullah Gulen, whom the Turkish government sees as a national security threat.

Erdogan accuses the Hizmet movement led by Gulen of infiltrating the state and attempting to overthrow the government.

The new government led by Prime Minister Ahmet Davutoglu cites combatting the 'parallel state' -- comprising Gulen's followers -- as one of its goals in the recently-unveiled government program.

Erdogan and Obama had their first private meeting since May 2013, when Erdogan visited Washington as prime minister. They plan to meet again on the sidelines of the U.N. General Assembly beginning September 16.

President Barack Obama has said he hopes to devise a regional strategy to try to counter IS, but current and former U.S. officials say they expect Turkey to avoid any major public role.

The bulwark of NATO's southeastern flank, Turkey has sensitive relations with seven sometimes unstable neighbors, bordering not only Syria, the origin of the IS threat, but Iraq, where the group took dozens of Turks hostage.

IS is holding some 49 Turkish citizens hostage, including diplomats seized from the Turkish consulate in Mosul when it overran Iraq's second-largest city in June.

"Everybody understands that the Turks are in a special category," said a U.S. official on condition of anonymity, alluding to the safety of Turkey's hostages and the reluctance of one neighbor to attack another for fear of retaliation.

"Turkey will be part of the coalition but what does that mean? It doesn't cost much to get your flag up on the wall."

A second official said Washington would ask Ankara to do more to keep foreign fighters out of Syria, a message Obama delivered diplomatically on Friday and Defense Secretary Chuck Hagel is expected to echo in Turkey next week.

Turkey has long sought to spur the United States to greater action to end the 3-1/2-year-old Syrian civil war in which an estimated 200,000 people have died.

Turkey has drawn up a "no-entry" list of 6,000 people suspected of seeking to join "extremists in Syria" based on information from foreign intelligence agencies, Turkish officials have said.

"The foreign fighter issue is well-known. It's a problem. It's certainly fueling ... their advance in Syria and in Iraq," said the second U.S. official. "That would certainly be something that we would look for help from Turkey on."

Turkey President Recep Tayyip Erdogan's leadership is crucial for the United States in addressing crises in the region, particularly fighting Islamic State militants, according to a former U.S. congressman.

Speaking Thursday at the Brookings Institute during a panel on the election of the Turkish president, former congressman Robert Wexler said that the U.S., particularly when fighting the threat of the Islamic State terror group, needs leaders who exert their leadership to remove “this cancer” from the region.

"When the American president looks over the ocean to see who is out there, who can possibly exert leadership, whether we like it or not, President (Recep Tayyip) Erdogan stands there," he added.

Wexler, who is now the current President of the Washington based S. Daniel Abraham Center for Middle East Peace said that as Turkey continues to have strong leadership, most U.S. allies in Europe have failed to exert credible leadership due to dismal economic performances and several other internal factors.

"The U.S. actually has one leader in Europe, Chancellor (Angela) Merkel, who, however, hasn't even the opportunity to exert leadership. And, historically, for a whole cost of reasons German foreign, diplomatic and military policy has been limited," he said.