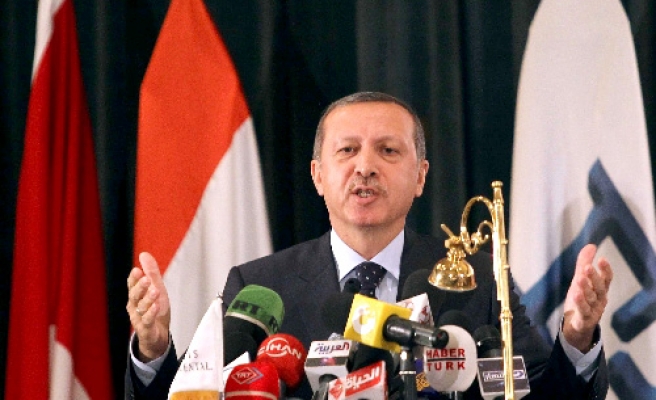 Turkish Prime Minister Recep Tayyip Erdogan has said that they should increase Turkey-Egypt trade volume to $5 billion in two years and up to $10 billion in four years.

"Today's talks with Egyptian authorities were very fruitful. We should hold the second Business Forum in Istanbul following the elections in Egypt," Prime Minister Erdogan said at Turkey-Egypt Business Forum in Cairo.

"However, these figures do not reflect our real potential. Turkey and Egypt have the necessary will and potential to increase their trade volume. We should increase Turkey-Egypt trade volume to $5 billion in two years and up to $10 billion in four years. I believe that we can reach this target easily by removing visa procedures between the two
countries following the elections in Egypt," he said.

Nearly 1,000 Egyptian businessmen and 280 Turkish investors were in attendance at the meeting.

Speaking to the AA, Buyukeksi said that Turkish businesspeople held more than 2,000 business meetings with 100 companies in Egypt on Wednesday.

Such a number of meetings was a record figure, Buyukeksi said.

Aside from the meetings, panel discussions took place on the construction sector, transportation and other investments, Buyukeksi said.