Commissioner for Home Affairs Cecilia Malstrom said the EU would for the first time draw "a road map to remove visa requirements completely," and that in the meantime the Union would take steps to ease visa procedures. 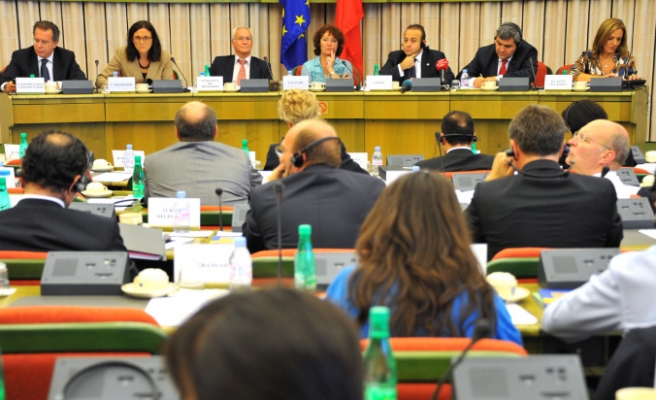 Today's gathering of the EU-Turkey Joint Parliamentary Committee was the first high level meeting between Turkey and the EU on what Ankara hopes would lead to further negotiations to remove visa requirement for Turks visiting member countries.

Commissioner for Home Affairs Cecilia Malstrom said the EU would for the first time draw "a road map to remove visa requirements completely," and that in the meantime the Union would take steps to ease visa procedures.

"We are about to embark on a journey. But it will take time. And to begin with, we will ease visa procedures," Malstrom told the meeting.

"We have seen the light at the end of the tunnel. All we ask for is an end to the discrimination and equal treatment with other candidate countries," Bagis said.

Bagis defied allegations that a wave of migration from Turkey to the EU would follow visa exemption, saying that a reverse migration was already underway.

"As a matter of fact, nearly 30 thousand Turks returned home within the past few years," he said.

Responding to a question by an EP lawmaker over Turkey's decision to freeze relations with the EU term presidency when the Greek Cypriot administration assumed the
helm in the absence of a settlement to the Cyprus issue, Bagis said membership negotiations could wait for six months without opening another chapter.

"It isn't the end of the world if we don't open a new chapter in accession talks for another six months," Bagis said.

"Turkish expats to be listened"

Bagis said Wednesday that they would listen to the suggestions of Turkish citizens living overseas while preparing a new constitution in Turkey.

Bagis met with Turkish citizens living in Strasbourg on the sidelines of his talks at the European Parliament on Wednesday.

The most crucial task of the Turkish Parliament in October will be the new constitution. We want to have a constitution that embraces all citizens of Turkey, Bagis said.

You, as Turks living overseas, have the right to vote. You can use your democratic rights and place pressure on the elected officials so that the EU supports Turkey in dealing with terror, Bagis also said.

Bagis will continue to hold talks at the European Parliament on Thursday.