Turkish FM Davutoglu said that Turkey would do take every necessary step for settlement of security, peace and stability in the Balkans. 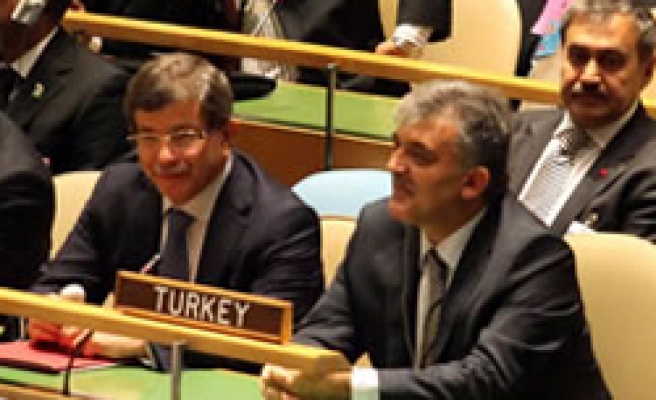 Turkish Foreign Minister Ahmet Davutoglu said on Thursday that Turkey would do take every necessary step for settlement of security, peace and stability in the Balkans.

Speaking to reporters, Davutoglu said Turkey had been exerting efforts for the Balkans to become an area of stability, prosperity and security.

Asked if Turkey would act as mediator between Serbia and Kosovo, Davutoglu said, "Turkey will take every necessary step. Relations with Serbia gained a very big momentum in the past one year and Turkey is pleased that it has turned into a strategic relationship."

"However, both parties know that there are differences of opinion between Serbia and Turkey. Turkey was the first country that recognized Kosovo and supported this country," Davutoglu said.

"When we look at the leaders of the Balkans, we see that almost all the presidents are professors and have a strong intellectual knowledge. Maybe, the most intellectual leaders in Europe are in the Balkans. This is a chance for the Balkans. A very positive relationship was formed among them. We are very hopeful about the future of the Balkans," Davutoglu said.

Referring to his meetings with Serbian President Boris Tadic and Foreign Minister Vuk Jeremic, Davutoglu said, "we may have different views however, we have shared them in a friendly way. Turkey has made important contributions to Balkan peace so far. We have an assertion about the Balkans; it will no more be a region remembered with crises."

Responding to another question, Davutoglu said his Bulgarian counterpart Nickolay Mladenov and he assessed the issue of chief Mufti, indicating that, "those are matters that can be discussed in a friendly way. There should not be a crisis on the matter. A solution will be found to this."

Turkish foreign minister said his busy schedule would continue in the UN with nearly 60 bilateral talks.