Somali officials and Red Crescent authorities have begun loading the aid to trucks to distribute it to camps in Mogadishu later on Tuesday. 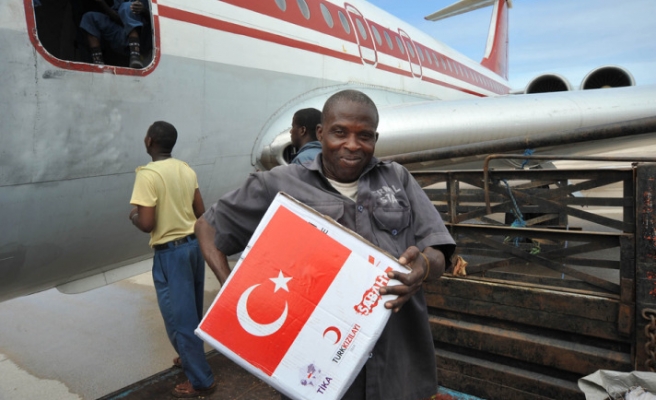 Somali officials and Red Crescent authorities have begun loading the aid to trucks to distribute it to camps in Mogadishu later on Tuesday.

First planes carrying Turkish people's donations and aid arrived in Somalia where some 5 million people face death as famine grips in the Horn of Africa.

Omer Tasli, director-general of the Turkish relief agency Red Crescent, told the A.A that they had a meeting with Prime Minister Abdiweli Mohamed Ali of Somalia and informed him on Turkey's aid campaign.

"We visited camps where Somali people migrated from rural areas to the capital city because of security problems and famine. We will visit the camps in southern part of the country tomorrow (Tuesday). We are going to sign a memorandum about humanitarian aid with Somali authorities. There is a serious shortage of food and potable water here. People are also in urgent need of health services. Another problem is the security issue," he said.

"The planes brought in 50 tons of foodstuffs and medicine. There is another plane which already landed in Nairobi, Kenya. We will begin distributing the aid tomorrow (Tuesday)," he said.

Tasli added that a ship carrying seven tons of humanitarian aid was also on its way to Somalia.

According to the United Nations, up to 12 million people in the Horn of Africa have been affected by famine. The U.S. Agency for International Development said that more than 29,000 Somali children under the age of 5 have died in the past 90 days while 640,000 Somali children were acutely malnourished.

The U.N. Office for the Coordination of Humanitarian Affairs (OCHA) estimates that more than $1 billion will be necessary to address all the needs. The USA has so far provided almost $460 million to the overall relief effort.