Flood-stricken Pakistan has asked for Turkey's help to meet its urgent needs, an embassy statement said. 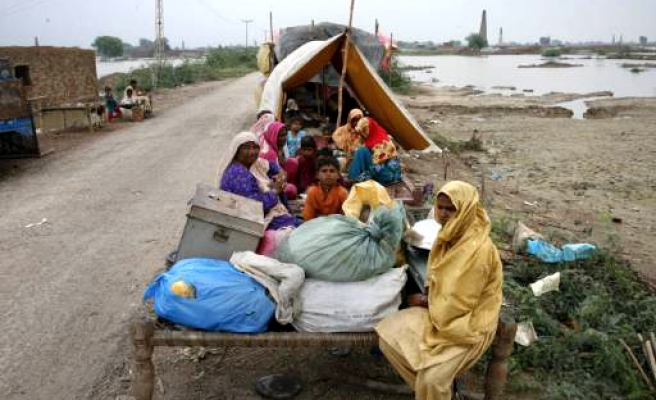 Flood-stricken Pakistan has asked for Turkey's help to meet its urgent needs, an embassy statement said.

A statement of the Pakistani Embassy in Ankara said Tuesday Pakistan was once more hit by floods triggered by monsoon rains, and Pakistan faced such a disaster when it was about to overcome effects of another devastating flood that hit the country in 2010.

"When the scale and magnitude of the disaster are taken into consideration, there is need for assistance of friends and international community," the statement said.

The statement said flood victims were waiting for urgent help in open-air camps, and expressed Pakistani government's gratitude to Turkish government and people for their generous assistance after the flood disaster in 2010.

In its statement, the embassy requested that Turkish government and people should once more extend help to the people of Pakistan.

The embassy enumerated urgent need as waterproof tents, foodstuff, water treatment systems and medicines, and said those who wanted to help Pakistan could donate to Prime Ministry Flood Assistance Fund.

More than 200 people died and over 4 million people were left homeless in the flood. More than 700,000 houses were destroyed and 1.5 million hectares of field were inundated.

The flood destroyed agricultural products in some 688,000 hectares of field.