Fabius said Turkey had managed to organize the sheltering of Syrians successfully despite the increasing number of new comers. 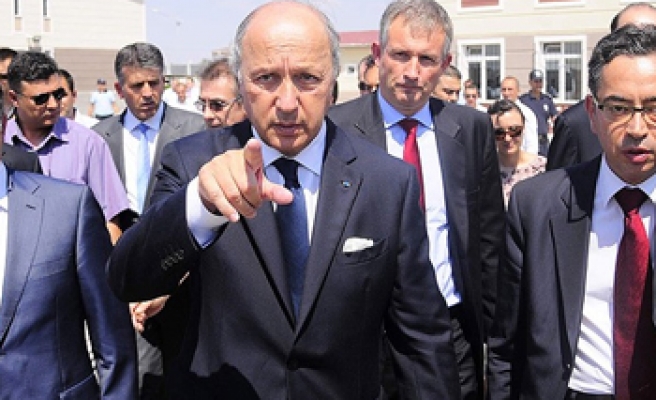 The French foreign minister has praised Turkey's efforts to shelter the Syrians fleeing the violence in their country.

"I would like to congratulate the Turkish government for its efforts. Syrians are being hosted in the best possible way in Turkey," said French Foreign Minister Laurent Fabius, speaking at a joint press conference with his Turkish counterpart Ahmet Davutoglu in Ankara, the Turkish capital.

"Turkey's way of dealing with the Syrian conflict is approved by and in line with the French government's stance on the matter," the minister also said.

Fabius noted that the question of Syrian refugees had been the core issue of his talks in Turkey, the last stop of his regional tour after Jordan and Lebanon.

"The drama in Syria gets deeper everyday and Bashar al-Assad's brutal regime is responsible for that," he said, noting that both Jordan and Lebanon had limited capacity to deal with Syrian refugees.

Fabius said Turkey had managed to organize the sheltering of Syrians successfully despite the increasing number of new comers.

He also said the refugee issue would be assessed in a detailed way at the UN Security Council meeting to be held on August 30.

Fabius said that efforts should be displayed for a structure to replace the current regime in Syria, however, such transition should be implemented under control in order not to lead to a chaos afterwards.
Commenting on Lakhdar Brahimi's appointment as UN's new peace envoy in Syria, Fabius said Kofi Annan's mission had ended as there had not been the necessary conditions neither for the envoy, nor for the observers to fulfill their duties.

"Now, what is being discussed is to open a political bureau there and to assign a prestigious person to lead the process," Fabius said, underscoring the importance of the "effectiveness" of such initiatives.

Fabius also said that cooperation between Turkey and France had been gaining a positive momentum in the recent term.

"Despite several problems that need to be addressed, Turkish and French governments' shared vision is to work together on as many issues as possible and that's exactly what we are doing," he said.

Responding to a question on the French government's stance on the incidents of 1915, Fabius recalled that the issue had given rise to discussions in France last year as a draft law had been voted at the French parliament and later overturned by the country's Constitutional Council.

"We need to resolve this situation, and frankly speaking, this issue affects Turkish-French relations negatively," he said.

"I believe we will find a solution to this matter within the framework of a historical approach cleared of emotions and based on concrete reality," he added.