Turkey's foreign minister said that Libya should become a democratic, free and united country in line with the demands of its citizens in the coming term. 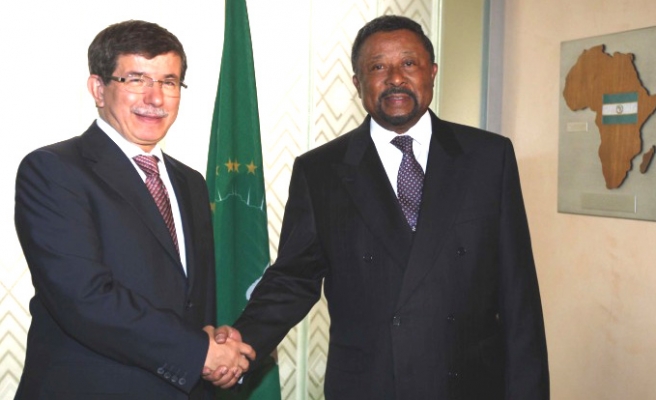 The likely end of Libya's Muammar Gaddafi's rule is a lesson for leaders in the Middle East who ignore the demands of their people for change, Turkey said on Monday.

Muslim Turkey, a rising diplomatic and political power in the Middle East, once had close political ties with Gaddafi's government and Turkish companies had projects worth more than $15 billion in the oil producing north African state last year.

Turkey was opposed to both sanctions against Libya and NATO intervention after a revolt against Gaddafi's 42 year-rule erupted in February, but in May Ankara called on Gaddafi to step down and recognised the rebels as the legitimate government.

Backed by NATO air strikes, Libyan rebels advanced into the Libyan capital on Monday as remnants of Gaddafi's fought last-ditch battles around the veteran leaders compound.

"What is happening in Libya is a lesson for the leaders of the region. It shows that leaders who do not listen to their people cannot stay in power," state TV TRT reported Foreign Minister Ahmet Davutoglu as saying, without mentioning any other country.

Davutoglu is in Ethiopia on a tour of African countries.

Turkey's foreign minister said that Libya should become a democratic, free and united country in line with the demands of its citizens in the coming term.

"Today is a historic day for Libya. The new Libya should become a democratic, free and united country in line with the demands of its citizens," Davutoglu said.

The minister said he hoped the situation in Libya would go back to normal as soon as possible and a single authority would give shape to the country's future.

Expressing Turkey's support to the Libyan Interim Transitional National Council, Davutoglu said Turkey hoped the reconstruction process of Libya would be conducted under the leadership of the Council and with the support of international community.

Davutoglu said, as the term president of the Libya Contact Group, he had begun holding talks with his foreign counterparts on the latest developments in the country.

Turkey has called on Syrian President Bashar al-Assad, who has unleashed a crackdown on pro-democracy protests, to end the violence and carry out reforms in the neighbouring country.

Turkey, unlike the United States and the European Union, has not called on Assad to step down, but has said repeatedly its patience is running out.