Gaza, Palestinian territories do not belong to Israel: Turkey's Gul 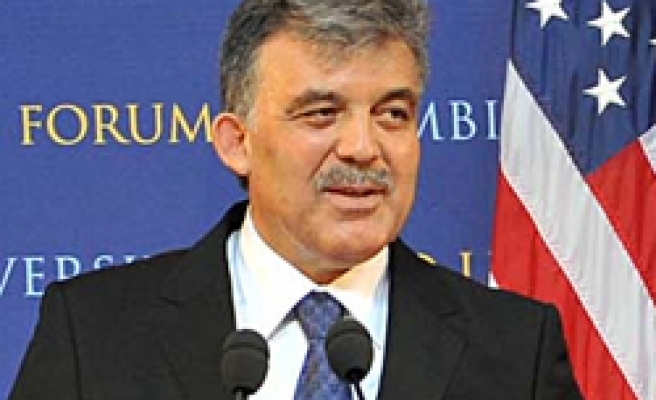 President Gul attended the World Leaders Forum at the Columbia University in New York and delivered a speech "What Next? Turkey's Global Vision for a Prosperous Future". He also answered questions of students.

Upon a question about the attack on the six-ship flotilla carrying humanitarian aid to Gaza in May, President Gul said, "there were strong relations between Turkey and Israel till the attack. Turkey is the first Muslim country recognizing the Israeli state and its importance in the region from the very beginning. The two countries signed many agreements. Turkey also led the indirect talks between Israel and Syria. When those talks reached a certain level, the Gaza incident happened."

"Gaza bombardment was broadcast live. Whole world witnessed it. It is impossible to pretend as if nothing has happened. The planned joint military exercises between Turkey and Israel were cancelled under the light of those developments. But it was not our preference," he said.

"There were people from 36 countries including representatives of non-governmental organizations on board the ships carrying humanitarian aid to Gaza. Nine people were killed when Israeli forces attacked the 'Blue Marmara' ship in the international waters. No one can ignore it. The issue should be resolved under the international law and the international law is binding for all UN member states," he said.

Answering a question, made a comparison between Turkey's Kurdish population and Palestinians, President Gul said, "these two are different. Kurds are the citizens of Turkey. We have been living together for hundreds of years. There are Kurdish people in the Turkish cabinet. We are the equal citizens of the Republic of Turkey."

"It is not only Turkey calling on Israel to put an end to the embargo on Gaza. Aid flotillas were sent to Gaza earlier from Greece and the United Kingdom. U.S. President Barack Obama and U.S. Secretary of State Hillary Clinton called on Israel to end the embargo," he said.

I agree with President Gul and his message. Being jewish is a religious fact and it is not being a 'nationality' with any claims to any territory.
Why that Land was given to them and made a Nation has been one of my queations, ever since 1945.