Allowing Turkey to join the European Union would make the bloc more relevant, but Germany and France feel threatened by the nation's bid, according to Turkey's deputy prime minister and economy minister. 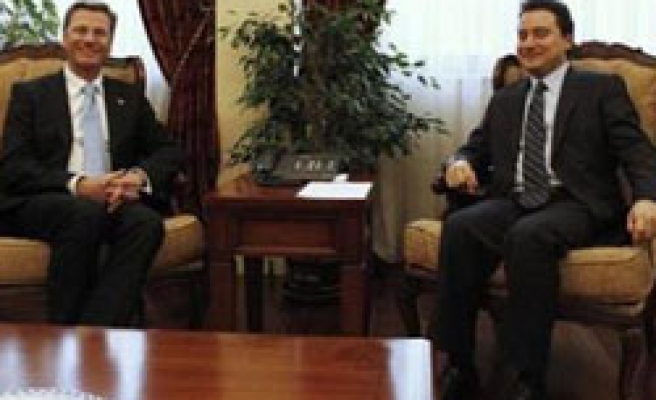 Allowing Turkey to join the European Union would make the bloc more relevant, but Germany and France feel threatened by the nation's bid, according to Turkey's deputy prime minister and economy minister, Ali Babacan, while Germany's foreign minister cautioned that fast-rising countries like Turkey aren't satisfied to watch events from afar.

Babacan, speaking at the Foreign Policy Association's World Leadership Forum in New York on Wednesday, said it was difficult to say whether Turkey would achieve its goal of EU membership.

“The relevance of the EU ... is decreasing very fast, especially after this economic and financial crisis,” Babacan said. “The weight of the European economy in the world has shrunk and will continue to shrink, and only through enlargement will the EU be able to protect its power and influence.”

Turkey's application to join the 27-nation EU has for years met with European resistance, partly because of Turkey's human rights record and frictions with Greek Cyprus, an EU member that Turkey does not recognize. Turkey would be the only Muslim-majority country in the EU and one of its largest by population.

“When Turkey becomes a member of the EU, Turkey is not going to be in a secondary position, and that's one of the reasons why countries like Germany and France are quite nervous about our membership,” Babacan said.

"One of world's fastest-rising countries"

As Babacan delivered his remarks in New York, German Foreign Minister Guido Westerwelle, who is a supporter of Turkey's full EU membership, made the case for deeper EU engagement with Turkey in an interview with a leading US daily.

Calling Turkey's constitutional reform approved in a Sept. 12 referendum “a step in the right direction,” Westerwelle said that it showed “Turkey wants a European future and has a European perspective.”

“We must recognize that the power balance of the world is changing. It sometimes amazes me how self-assuredly countries that are influential today assume that things will always be that way. We will have to work hard to achieve that. Turkey is one of the world's fastest-rising countries. Its economic success story is breathtaking. It is pushing forward on political reforms, even though it knows it still has work to do. Such fast-rising countries aren't satisfied to watch events from afar. They want to influence events as part of the international community. It's only a question of time before these young, dynamic societies are also among the political, cultural and intellectual centers of the world,” Westerwelle said in an interview with The Wall Street Journal published on Wednesday, when reminded of his coalition partners' reluctance to see Turkey as a full EU member.

“Twice in the year since I became foreign minister I have made a personal contribution to ensure that two new chapters were opened. Now we must act wisely and early enough so that we don't arrive at a dead end by the end of this year but instead ensure that this process [of EU accession talks] is continued,” he said, when asked how the EU should respond to Turkey now.