Erdogan and Papandreou also exchanged views on preparations for a high-level cooperation council meeting between the two countries. 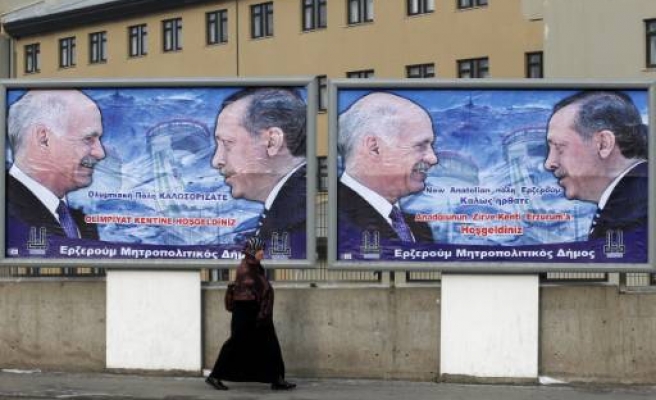 "Two hours ago, the Prime Minister had a telephone conversation with Mr Erdogan," government spokesman Ilias Mosialos told reporters. "The Prime Minister said there should be self-constraint and calm" over Cyprus, Mosialos said.

A Turkish oil exploration vessel left the Aegean port of Izmir on Friday to carry out surveys off northern Cyprus amid tensions with Greek Cypriots on the divided island over rights to hydrocarbon reserves in the eastern Mediterranean.

Regional tension rose after Cyprus's Greek Cypriot government announced on Tuesday that drilling had begun in a southeast offshore area adjoining a gas field claimed by Israel, reputed to be the world's largest find in the past decade.

Mosialos said the call focused on security issues related to Cyprus in general, but the two leaders did not discuss the oil drilling.

"The Prime Minister said unilateral actions that create problems in the region should be avoided," he said.

Erdogan and Papandreou also exchanged views on preparations for a high-level cooperation council meeting between the two countries.

The two leaders agreed to hold the meeting in coming months.

Sources cited Erdogan as telling his Greek counterpart that unilateral steps regarding offshore drilling for oil and gas in the region would harm the ongoing negotiations process, stressing that the issue should be left after a comprehensive settlement was reached to reunify the island.

Erdogan underlined it was the Greek Cypriot administration's unilateral decision to start drilling southeast of the island that moved the Turkish Republic of Northern Cyprus to sign an agreement with Turkey for hydrocarbon exploration.