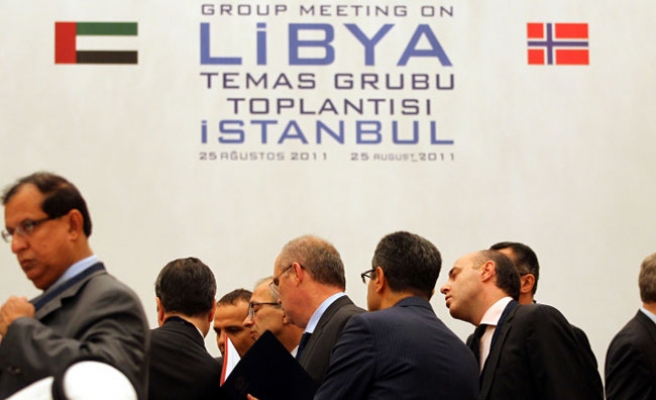 Libya Contact Group has convened in Istanbul on the level of political directors.
The meeting at Istanbul's Conrad hotel began with opening remarks of Turkish Foreign Minister Ahmet Davutoglu.

Political directors from 27 countries including Turkey, the Arab League, the African Union, the European Union, NATO and the United Nations attended the 3.5-hour meeting.

Fathi al-Baja, a member of the Libyan National Transitional Council, told reporters following the meeting that they expected an aid of $2.5 billion to be sent to Libya by the end of the month. He said that the aid would be used to ensure security.

Foreign Minister Davutoglu and Mahmoud Jibril, chairman of the executive board of the Libyan National Transitional Council, are expected to hold a press conference later in the day.

Group has highlighted importance of Libya's national unity and Libyan people's will.

In a statement at the end of a meeting in Istanbul, the Libya Contact Group urged Muammar Gaddafi to turn himself in to avoid further bloodshed in the North African nation.

"The participants attached utmost importance to the realisation of national reconciliation in Libya. They agreed that such a process should be based on principles of inclusiveness, avoidance of retribution and vengeance."

The contact group also urged the United Nations Security Council to pass a resolution currently under discussion to unfreeze Libyan assets and agreed to free up these assets in an "expedited" manner.

It said that a National Congress will be formed with the participation of all parties in Libya and a committee to be established by the Congress would begin working on a new constitution.