Gul says 'Muslim Turkey has dialogue with all states in region'

Turkish President Gul said Turkey was not only dealing with its own problems anymore but was exerting efforts to help solution of regional problems. 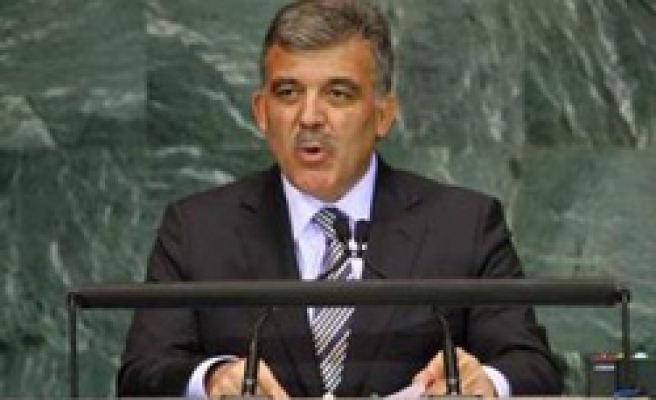 Turkish President Abdullah Gul said Turkey was not only dealing with its own problems anymore but was exerting efforts to make contributions to solution of regional problems.

President Gul who attended the Charlie Rose Show at Bloomberg Channel in New York where he is attending the UN General Assembly meeting said Turkey, as a unique Muslim country carrying out negotiations with the EU, had dialogue channels with all countries in the region.

Gul said Turkey had a positive foreign policy agenda, and exerted efforts to contribute to the solution of the problems of other countries in the region, which showed Turkey embraced the region.

Gul said Turkey was secular democratic state and there were no efforts to change this in Turkey.

Commenting on the Kurdish problem, Gul said as Turkey improved its democratic standards, problems were solved, noting that terror prevented them from accomplishing more.

Her said PKK murdered civilians and posed a threat for both Turkey and Iraq. He said the central authority in Iraq was not strong and therefore the North of Iraq became a safe haven for PKK.

Mr Gul is being disingenuous when he claims Turkey has a dialogue with all countries in region. Turkey refuses to discuss or even meet with Cyprus representatives and solve the Cyprus issue. As a matter of fact after the Turkish invasion of Cyprus, Turkey refused to even recognize the existence of Cyprus. More recently Turkey refused to meet with Israeli officials. This is the zenith of hypocrisy.

Hipocracy about what? I think you have no idea about Turkey's diplomacy. Turkey has kept its dialogue with Israel despite a national outcry after Israel bloodthirstily killed peacefull Turkish activists! I can't imagine the situation of Turkish people living in Turkish Cyprus under the Greek rule! Even so, Turkey stands by Cyprus reunification! Do you remember the 2004 referendum? Greek rejection?