A group of journalists left from southern province of Hatay for Cilvegozu border gate to proceed to Syrian Hama city to follow the recent situation. 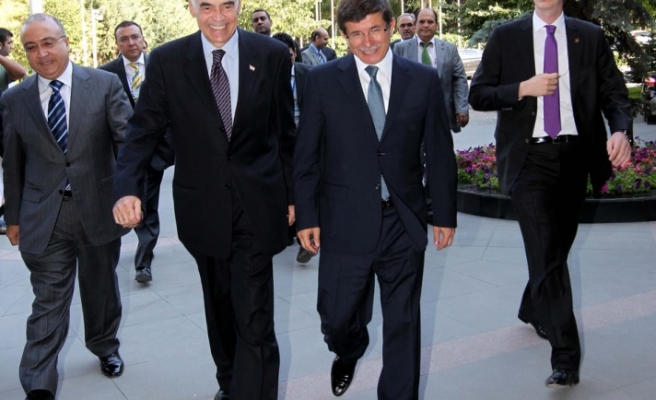 Diplomatic officials said that after news stories by some media organs, Davutoglu called Onhon by phone asked him to examine the situation.

Meanwhile, a group of journalists left from southern province of Hatay for Cilvegozu border gate to proceed to Syrian Hama city to follow the recent situation.

The journalists will go to Hama after a statement that Syrian army withdrew tanks and heavy weapons from the city.

Foreign Minister Ahmet Davutoglu said on Wednesday that Turkey's Ambassador in Damascus Omer Onhon reaffirmed that tanks and heavy weapons were withdrawn from Hama and that the journalists would be taken to Hama.

10 journalists, who will carry out research in Hama, left for Cilvegozu border gate from Hatay.

"Egypt's achievements are of great importance for the future of our region," he said.

Davutoglu said that Turkey was one of the countries which made most investments in Egypt.

When asked whether he reminded Syrian President Bashar al-Assad of trial of Egypt's former president Hosni Mubarak, Davutoglu said that all statesmen should learn lessons from developments in the region.

Replying to questions of an Egyptian reporter regarding the messages conveyed by Davutoglu to al-Assad, Davutoglu said that there was a Turkish vision especially in Middle East. "In 2005, many countries had tried to isolate Syria, but Turkey decided to deepen its relations with this country. We carry these messages with the same motive. We see destiny of Syria as ours," he said.

Egyptian Foreign Minister Amr said that they attached a great importance to relations between Turkey and Egypt.

Trade volume between the two countries quadrupled in the past four or five years and Turkish companies had great investments in the free zones in Egypt, Amr said. High Level Strategic Cooperation Council that would be established between Turkey and Egypt would boost cooperation, he said.

Incidents that took place in Egypt affected several countries in the region, he said.

Amr said that they appreciated Turkey's efforts in the region and Syria.

Replying to a question on situation in Syria, Amr said, "we called on our Syrian brothers to sit at the dialogue table. They should end this bloodshed."