Turkey's prime minister said that it was high time for Turkish and Arab nations worked for a common future. 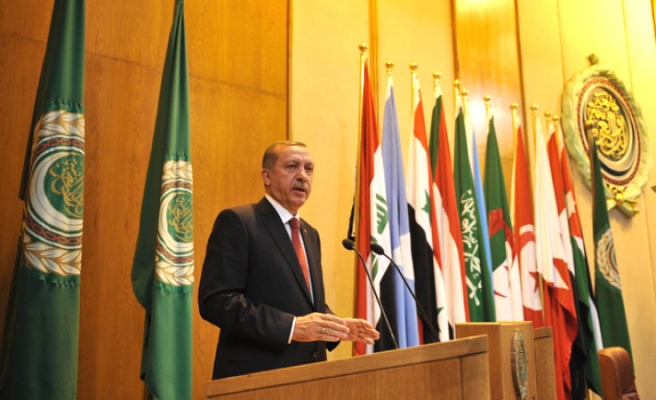 Turkish Prime Minister Recep Tayyip Erdogan has said that Israel-Palestine issue was a matter of humanity.

"As I have mentioned on every occasion that Palestinian cause is a struggle to raise and poise a nation's honor. It is not only the cause of Palestine and Palestinians, but it is the cause of every state and every nation who are in favor of justice, rights, rule of law and humanity," he said at the Arab League Foreign Ministers' Council Meeting in Cairo, Egypt.

"Israel-Palestine issue is not a matter between the two states. It is actually a matter of humanity, a matter of decades. It is a decisive matter for the Middle East and for global peace. Recent developments in our region cannot overshadow the fact that Israeli-Palestinian dispute was the basic issue in the Middle East," he said.

Erdogan said, "Israel-Palestine issue has gone beyond its limits and become a decisive matter for legitimacy of the international order. As long as current situation in Gaza continues, chaos will further deepen in the international order about the meaning of concepts such as rights, law and legitimacy. It is impossible to maintain the current status quo. Those who pursue policies based on atrocity, and those who think their power is endless will lose sooner or later. Palestinian people should acquire the state they have longed for a long time. Recognition of Palestinian state is the only thing to do. It is not an option, but a must."

"We have to support Palestinian people's rightful and legitimate struggle. If God wills it, we will have the chance to see Palestine in a quite different status at the United Nations by the end of this month. To this end, we have to work together with our Palestinian brothers. Let's hoist Palestinian flag. That flag will become the peace and justice in the Middle East. Let's contribute to efforts to ensure peace and stability in the Middle East," he concluded.

Turkey's prime minister said that it was high time for Turkish and Arab nations worked for a common future.

"It is high time that we, sharing the same geography and destiny by using different languages, re-claimed for a common future," Erdogan said.

Erdogan said Turks and Arabs shared a common civilization, common belief, common culture on a common geography for centuries, and inherited goals, created on the same civilization, to their upcoming generations in different languages.

"We are two nations with a common history, today and future," Erdogan said.

Erdogan also said a crying Palestinian child in Gaza hurt a mother in Ankara, and similarly the voice of youth in Cairo was welcomed with the same enthusiasm in Tripoli, Damascus and Istanbul.

"Today, we are in a historic turning point where we share our happiness and agonies in the highest level, and we today understand each other better than ever and we are looking at the future with hope and confidence," Erdogan also said.

Erdogan has said that the coming period was difficult and he believed that Arab people would finalize the process successfully with their own will.

During Arab League Foreign Ministers' Council Meeting in Cairo, Egypt, Prime Minister Erdogan said there might be secret circles who would try to prevent this process. "All of us should be well-prepared against them," he said.

Erdogan said, "our slogan must be more freedom, democracy and human rights."

"We have to meet legitimate demands of our people through legitimate ways," he said.

Premier Erdogan said that if justice and law were preserved, new doors for hope would be opened.

Erdogan said he hoped that Arab people would fulfill this transformation for honorable future.

Erdogan said that they welcomed Libyan people's struggle for freedom and democracy. "The decision regarding Libya's representation in Arab League by the National Transitional Council is a pleasing and important development," he said. Erdogan said, "we also think that Libya should be represented by NTC in the UN General Assembly."

Turkish prime minister has said, "only people can call to account for attitude we assumed and steps we took in the face of nations' legitimate demands. This is valid for all countries including Israel."

"As Turkey, we cannot remain indifferent to the developments in the Middle East not because Turkey is a part of the same geography, but because we have a common history and we have ties of eternal brotherhood. Furthermore, any development in the region has the potential to affect a vaster geography because of the dynamics in the region. It is not realistic to consider any single event separately from the balances in the region," Turkish premier said at the Arab League Foreign Ministers' Council Meeting in Cairo, Egypt.

Erdogan said, "we have given a friendly hand to everyone in need since the beginning of the transition process in the region. Some of them accepted our assistance while some rejected it. We did not mind it. We insisted on making friendly suggestions that governments are obliged to meet legitimate demands by their peoples. I want to reiterate once again that only people can call to account for attitude we assumed and steps we took in the face of nations' legitimate demands. This is valid for all countries including Israel."

"Israel continues taking irresponsible steps which disturbed its own legitimacy while trying to ensure legitimacy in our region. The atrocity of Israeli government which disregarded international law and human honor without any hesitation, has gone beyond limits and Israeli forces staged a military attack on an aid flotilla carrying toys for children, in the international waters. Nine Turkish citizens were killed in that attack. A few weeks ago, five Egyptian people were killed similarly. Israeli government's aggressive policies jeopardize future of its own people," Erdogan added.

Turkey's prime minister said that international circles, particularly the United Nations (UN), would be remembered as assailants if they went on turning a blind eye to Israel's unilateral and spoiled behaviors.

Erdogan said if international circles continued to turn a blind eye to Israel's unilateral and spoiled behaviors and its inhuman implementations, they would be remembered as the assailants of this crime.

"Whenever Israel behaves as a moderate, responsible, serious and regular state that respects human rights and right to live, it will then manage to save itself from loneliness," Erdogan said during Arab League Foreign Ministers' Council Meeting in Cairo, Egypt.

Erdogan said conditions Turkey had laid down to normalize its relations with Israel were still valid, and unless Israel apologized and paid compensation to families of those killed in the attack, and ended embargo on Gaza, Turkish-Israeli relations would not be normalized.

Erdogan said the Palmer report was not binding for Turkey, and Turkey considered it non-existing. "I would once more like to declare that we do not acknowledge any sentence that sees Gaza blockade as legitimate."

Moreover, Erdogan said Turkey, a state that had the longest coast line in the East Mediterranean, would take every measure it deemed necessary for freedom of the seas.

Erdogan said Turkey did not recognize Israel's Gaza blockade, and Turkey would ensure the International Court of Justice to investigate May 31st Israeli blockade on Gaza.

"In this context, we will launch initiatives in order to activate the UN General Assembly, and we will extend every support to Turkish and foreign victims of the Israeli attack who seek their rights in courts," Erdogan said.

"Like individuals, states have to pay the price of their murders for a more fair, livable and secure world order," he said.

Erdogan said states had to pay prices of terror crimes, and Turkey would continue to raise its voice against every action against itself and international law, and would do everything in its power to respond to such actions.

In his speech, Erdogan thanked the secretary general of the Arab League for his support to Turkey's steps against Israel, and said he was sure that this support and solidarity would continue when Turkey resorted to the International Court of Justice in order to prove the illegitimacy of the blockade.