President Hassan Rouhani, whose country's relations with Turkey have been strained by the Syrian civil war, in Ankara for his first official visit to Turkey. 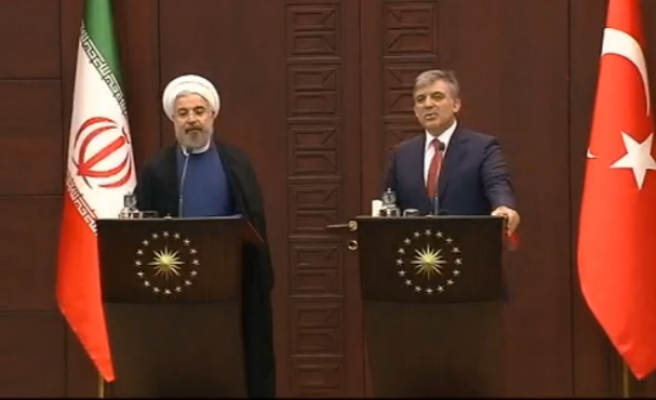 Iranian president Hassan Rouhani has become the first Iranian leader to pay an official visit to Turkey in 18 years, accompanied by a number of Iranian cabinet ministers and high-ranking officials.

Turkish president Abdullah Gul greeted his counterpart with a parade at Ankara's Cankaya Palace, where the two leaders gathered for a joint press conference after meeting privately.

"Instabilities exist in our region ... Iran and Turkey are determined to increase their cooperation to establsh stability in the region," Rouhani said after talks with President Abdullah Gul in Ankara.

"The Fight against violence, extremism, sectarian conflicts and terrorism is Irans major objective," he added.

Gul said that Syria was discussed during his meeting with Rouhani, without giving any details. It was unclear whether the two countries were approaching any concrete steps to help scale down a conflict that holds perils for both.

President Rouhani had earlier said that relations between Turkey and Iran are critical to the region, in a press conference at the airport in Tehran before his departure for Ankara.

Despite deep divisions between Ankara and Tehran over Syria, the potential of an Iranian market of 76 million people with some of the world's biggest oil and gas reserves is a magnet for Turkish companies.

Turkey depends on imports for almost all of its natural gas needs and is keen to increase oil and gas imports from Tehran in anticipation of sanctions against Iran's huge energy sector being dismantled.

Rouhani said his meetings with Turkish officials will focus on energy relations, particularly on oil, natural gas and electricity, noting that the two countries will also sign agreements regarding economic relations, politics, culture, transportation and security.

Rouhani stressed that Turkey is important regionally, adding he was glad that Iran and Turkey had enjoyed political and economic cooperation for many years.

Turkey and Iran signed a joint political declaration establishing a High-Level Cooperation Council during Erdogan’s visit to Iran in January.

A senior Turkish official told Reuters that Ankara will repeat its demand for a discount on the price of natural gas from Iran, which Ankara says is too expensive compared with other suppliers like Russia and Azerbaijan.

Under a contract signed in 1996, Turkey imports 10 billion cubic metres per year of gas from Iran. The contract became active in 2001.

Turkey's state-owned Petroleum Pipeline Corporation (BOTAS) applied to an international court of arbitration in 2012 for a ruling on Iran's gas pricing. The case is still pending.

"The Iranian side demanded dropping of the legal case and it was discussed during the talks," said a Turkish official on condition of anonymity.

Iran has so far dismissed Turkish demands it drop the price of gas under the current agreement.

Rouhani's visit to Turkey takes place as Iranian, U.S. and European Union officials hold talks about Tehran's disputed nuclear programme in Geneva in an effort to break a logjam in wider negotiations over Tehran's nuclear program.

Nuclear talks between Iran and six major powers in Vienna last month to reach a final deal ran into difficulties, with each side accusing the other of having unrealistic demands in negotiations.

A preliminary deal was penned in Geneva in November between Iran and six major powers, under which Iran accepted to halt some sensitive nuclear activities in exchange for partial easing of sanctions. It went into effect in January 20.