Turkey was the first country which extended help to wounded people in the war, Goga said. 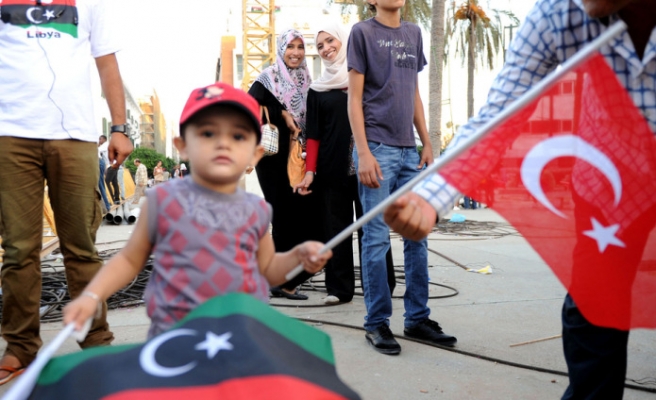 Many papers wrote and televisions broadcast news stories about Erdogan's visit to Libya. A Libyan daily wrote that Premier Erdogan's visit would boost Turkish-Libyan relations, and his visit had a special meaning since Libya would firstly be visited by the prime minister of Turkey after overthrow of Moammar Gadhafi. It also said that Erdogan would meet with Libya's National Transitional Council's Chairman Mustafa Abdul Jalil, stating that Erdogan and Jalil would discuss political transformation, restructuring and economic development during their meeting.

National Transitional Council (NTC) members are getting prepared to welcome Turkish Prime Minister Recep Tayyip Erdogan. The Council's Chairman Mustafa Abdul Jalil and Mahmoud Jibril, chairman of executive board of the NTC, proceeded from Benghazi to Tripoli ahead of Erdogan's visit.

Abdel Hafiz Goga, spokesman for the council, told AA correspondent that Turkey always supported NTC and Libyan people. "We will have very good relations with Turkey and Turkish people. What Turkey and Libya will do together in the future will be discussed during Erdogan's visit," he said.

Turkey was the first country which extended help to wounded people in the war, Goga said. Some of wounded people were taken to Turkey for their treatment and Libyan people would always remember what Turkey did, he said.

Goga called on Turkish companies to return to Libya and said that Turkish and Libyan companies would undersign several important projects in the future.

Goga also gave information about clashes continuing in Sirte, Ban Walid and Sabha and said that they would take control of Sirte and Ban Walid within a few days, but it could be difficult to seize control of Sabha.

Family of Moammar Gadhafi and his supporters started to leave the country and it meant that Gadhafi supporters lost their hopes, he said.

Recalling that Gahdafi's son Saadi and some high level officials fled to Niger, Goga said that they would want extradition of Saadi and other officials from Niger.

Libyan people, who gather at Martyrs' Square in Tripoli every evening to celebrate their "victory", are looking forward to hosting Erdogan.

Mahmoud Jibril, deputy head of NTC, earlier said that Libya was grateful to Turkey for its efforts.

Sena Halil, a Libyan person living in Tripoli, said that Erdogan was "a good and democratic person" and they loved him.

Halil said that Erdogan did many good things for Libya and expected that Turkish-Libyan relations would improve further.

Sadun Muhtar said that they would always remember what Turkey did for Libya.

Erdogan is expected to visit Libya on September 15.