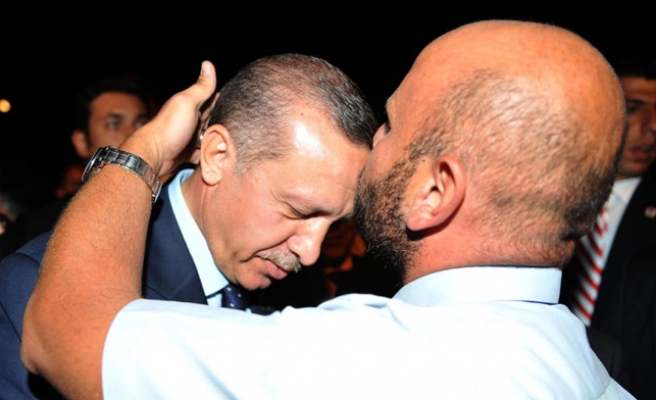 People of Benghazi, Libya welcomed on Friday Turkey's prime minister enthusiastically, and waited at the square where he would make a speech for five hours to listen to him.

Erdogan shook hands and took photographs with not only NTC members but also Libyans and Turkish citizens in the city, who all came to welcome him at airport.

Muaz Mustafa Haddad was among those who welcomed Erdogan. Haddad was the child who was injured in incidents in Benghazi with a bullet in his head and brought to Turkey for treatment. Premier Erdogan had visited Haddad at Turkish hospital.

Haddad showed the photographs Erdogan and he took when the premier visited him at hospital to Erdogan at the airport. Erdogan hugged Haddad and other children beside him, and kissed them.

After the welcome ceremony, Erdogan entered Benghazi with a long convoy of vehicles. Benghazi people waiting in streets hailed Erdogan's convoy with victory signs, and showed great affection in the Turkish prime minister with Turkish flags.

Erdogan's Benghazi visit coincided with a significant day for Libya. Omar Mukhtar, who struggled against the Italians when defending Libya, was taken hostage by the Italians and was executed on September 16, 1931.

The Libyans had earlier decided to inaugurate Omar Mukhtar Monument, built in Benghazi, on September 16 and invite Erdogan to inauguration ceremony.

The people of Benghazi started to gather around the monument as of 4:30 p.m. as they had learned Erdogan would arrive by 5 p.m.

However, Erdogan could not complete his schedule in Tripoli and Misurata on time, and therefore, the group waited at the square for five hours to listen to Erdogan.

As Erdogan arrived, the group chanted slogans as "Erdogan, Erdogan", and Erdogan waved his hand to respond to the slogans.

Erdogan shook hands with Omar Mukhtar's son Muhammad Omar Al Mukhtar, who was also waiting for himself at the square, and they chatted for a while.

Premier Erdogan addressed the people of Benghazi for half an hour, and said Turkey would always stand by Libyan people and called on the Libyans to unite and not to be in conflict with each other.

Erdogan's speech was often interrupted by applause. At the end of the speech, Erdogan and Muhammad Omar Al Mukhtar opened the Omar Mukhtar Monument.