Mullen says Israel does not involves US arm sales to Turkey 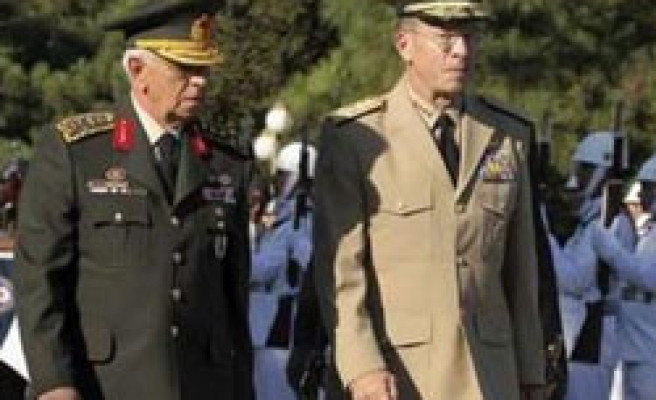 Chairman of the U.S. Joint Chiefs Adm. Michael Mullen said on Saturday Turkey and the United States had a very robust foreign military sales program and program continued to flourish well in the future.

Admiral Mullen gave a news conference and replied to the questions of reporters at the U.S. Embassy Building in Ankara.

When recalled the news reports that the United States decided not to sell some weapons to Turkey under pressure from Jewish lobby in the United States to ban sales of some weapons after the raid on Mavi Marmara flotilla and asked if that was true, Admiral Mullen said, "no, we have a very robust foreign military sales program with Turkey and that program continues to flourish well in the future."

Asked if the United States had any specific request from Turkey for the transfer of non-military elements through Turkey, "there are no specific requests made while I have been here."

He said none of the military equipment and people have come to Turkey for this.
Admiral Mullen said he did not come to Turkey to negotiate any of those.

He said the Turkish States has withdrawn around 100,000 troops last year under the deal signed with the Iraqi government, noting they would continue to do so in the next 15-16 months.

Admiral Mullen said no decision has been made in terms of how to do that and noted that they could use the same routes in the future which they currently use.

Responding to a question whether his talks included the deployment of a planned missile defense system in Turkey against Iran, Mullen said positions of both Turkey and the United States in nuclear weapons issues in Iran were the same.

"I did not specifically discuss that with General Kosaner," Mullen said adding however that, the membership of NATO believed that having a missile defense architecture is a very important capability that needs to be put in place and evolve over time.

"There have been discussions with several members of NATO to include Turkey, Bulgaria, Romania in terms of parts of this phased-adaptive approach missile defense architecture and whether countries would support installations and capabilities for this overall architecture," Mullen said.

Answering a question whether the U.S. would participate in Anatolian Eagle, an annual military exercise of Turkish, U.S. and Israeli air forces, Mullen said the U.S. had held exercises with Turkey for many years and the U.S. conduct two exercises each year along the lines of the Anatolian Eagle exercise.

Mullen said he had talked with Gen. Kosaner about future participation in exercises, adding that the top generals had an expectation that participation would continue as it had in the past.