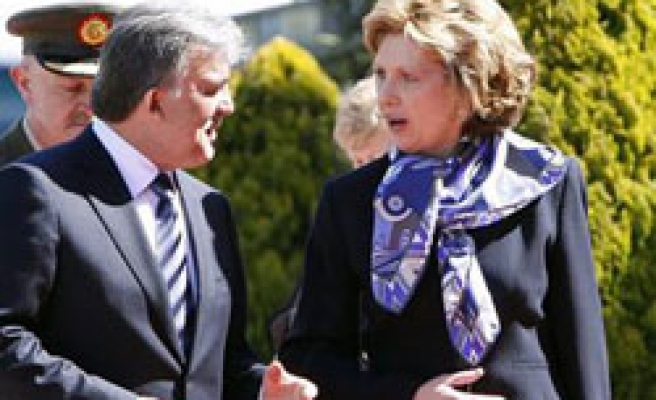 Speaking at a joint news conference together with Turkish President Abdullah Gul, McAleese said she was glad to be the first Irish President visiting Turkey.

McAleese said around 120,000 Irish citizens visited Turkey as tourists every year, and noted that the tourists strengthened ties by purchasing property in Turkey.

The guest president said Turkey and Ireland have relations rooted in history despite geographical distance and referred to Turkish nation's assistance to Ireland during the Famine in 1847, the time when one million Irish people lost their lives.

"Then Sultan of the Ottoman Empire sent three ships, full of foodstuff, to Irish ports in Drogheda. Irish people never forgot this unique generosity initiative. The symbols in the Turkish flag, the crescent and the star, have become the symbols of the region. Moreover, we see the Turkish symbols on the uniforms of the soccer team," she said.

McAleese said all those were small signs how Ireland remembered Turkey and the importance it attached to Turkish people.

The Irish president said becoming an EU member required a difficult process however noted that it was a vision that deserved struggle.

"The more the two countries get closer in education, the more people will understand each other better. Turkey has a good education system," she said and noted they would be happy to host Turkish students in Ireland.

Asked to comment on the position of her country regarding Armenian allegations, McAleese said Ireland was one of the countries who knows to keep itself