'No US demand' for heavy Iraq equipment transfer via Turkey: Official

Turkish Ministry ruled out speculations that the top US commander's visit was related to demands from Turkey to allow heavy combat equipment transfer from Iraq. 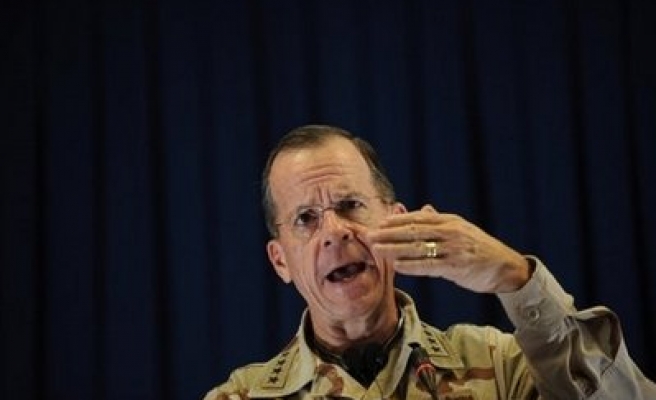 The Turkish Foreign Ministry on Friday ruled out speculations that a visit to Ankara by a top US commander was related to specific US demands from Turkey to allow heavy combat equipment in Iraq shipped home through Turkish territory.

Adm. Michael Mullen, chairman of the US Joint Chiefs of Staff, was in Ankara on Friday for talks with Turkish Chief of General Staff Gen. Isik Kosaner and Defense Minister Vecdi Gonul.

Since the visit came only days after US President Barack Obama announced the end of combat in Iraq, some news reports have suggested that the visit was aimed at requesting that Turkey allow the US to use its territory for withdrawing troops from Iraq.

The visit by Mullen, which followed his visit to flood-hit Pakistan, was basically to congratulate Kosaner (recently appointed to his current post), which has been a customary procedure between US and Turkish armies for a long time, both US and Turkish officials said.

Any specific agenda or a demand by the US side during this visit is out of the question, Foreign Ministry spokesman Selcuk Unal told reporters on Friday during his first regular weekly press briefing after being appointed to this post recently.

There is no demand from the US for transferring heavy combat equipment from Iraq through Turkish territory, Unal said in response to a question.

“As said before, there is a request from the US side that was conveyed recently concerning the shipment of non-combat, technical equipment through Turkish territory and Turkey is looking at this request favorably. Negotiations are still underway,” Unal added.

The US Embassy in Ankara also released a brief statement concerning Mullen's visit on Friday.

“There are no set agenda items for this introductory visit,” the statement said.

Obama had previously ordered the end of combat missions by Aug. 31 in a step toward the full withdrawal of American forces by the end of next year. In June, when Gen. David Petraeus, who previously commanded US forces in Iraq and is now the top commander in Afghanistan, visited Turkey for talks with officials, then-US Ambassador to Turkey James Jeffrey had denied that the visit was linked to the US withdrawal. At the time, now-US Ambassador to Iraq Jeffrey said there was no final plan on the overall US withdrawal from Iraq; therefore, the issue was not on the agenda of Petraeus' talks.

Roughly 50,000 US soldiers still in Iraq are moving to an advisory role in which they will train and support Iraq's army and police. Obama has promised to pull all US troops out of Iraq by the end of 2011.

“There is still heavy equipment in Iraq but it will not come out of Turkey. There are no plans to withdraw any kind of heavy equipment through Turkey,” a US official who requested anonymity told Cihan News Agency on Friday.

Kuwait and Jordan territories have been used for logistics operations involving removing more than 1 million pieces of equipment, including thousands of tanks, various types of military vehicles, repair parts and general supplies from Iraq, according to Cihan News Agency.

The possibility of US shipment of heavy combat equipment has particularly sparked public interest in Turkey since such shipping would have to be accompanied by US soldiers, which would require Turkish parliamentary approval.

In March 2003, Turkey's Parliament denied the US permission to open up a northern front against Iraq from Turkey. The Turkish Parliament's refusal of the government motion led to the so-called “March 1 syndrome” when talking about bilateral relationship between the two NATO allies. Parliament's decision at the time came despite strong US pressure.

Both Western and Ankara-based observers claim that the US would probably not push its ally with demands that would be fulfilled with difficulty and face opposition from the Turkish public.