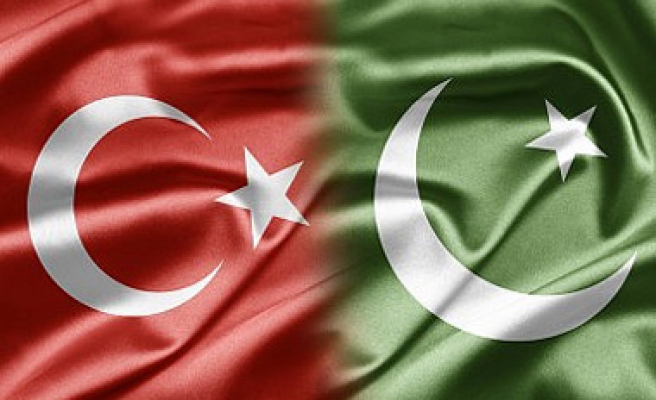 The Minister for Housing, Urban Development & Public Health of the Government of Punjab, Tanveer Aslam Malik, leading a high-level delegation of senior government officials and private sector executives, met with Turkish Minister for Environment and Urbanization Ms. Fatma Güldemet Sari in Ankara today.
In tete-e-tete and delegation-level talks, the two sides held a detailed exchange of views on multiple dimensions of Pakistan-Turkey relations and reaffirmed the commitment of the top leadership to forge a strong bilateral economic partnership, commensurate with the excellent political relationship.
Minister Tanveer Malik recalled the visit of Punjab Chief Minister Muhammad Shahbaz Sharif to Turkey in December 2015, during which he had met with President Recep Tayyip Erdogan and Prime Minister Ahmet Davutoglu and had discussed ways of further deepening trade, investment and economic cooperation with Turkey. Noting the ongoing projects in Pakistan like Metro bus, solid waste management and wind mill, Minister Malik stressed that Pakistan was looking forward to Turkish investment in a range of sectors – including energy, infrastructure development, agro-based industry, and municipal services. He also highlighted the Punjab Government’s special focus on low-cost housing and learning from Turkish experience in this context.
Turkish Minister Fatma Güldemet Sari fully reciprocated the desire for deepening and broadening the economic relationship between Turkey and Pakistan and affirmed Turkey’s readiness to share its experience in urban planning, housing, and other related fields. The Minister also highlighted the extensive work of the Housing Development Administration of Turkey (TOKI) in the housing sector in Turkey and added that the Turkish side would be glad to share the accumulated knowledge and experience, adapted to Pakistan’s environment and specific requirements.
The Punjab delegation’s visit is aimed at learning from Turkish experience in provision of low-cost housing. It is in follow-up of the recent agreement reached between the Government of Punjab and TOKI. Under the Memorandum of Intent signed by the two sides, TOKI will provide technical consultancy support to the Punjab Government in its endeavours to provide 25,000 housing units in 2016 and further 25,000 in 2017.
In this context, the Chief Minister during his visit to Turkey in December 2015 had also met with TOKI President. In response to his request, President of TOKI visited Lahore in early January 2016 and reached the understanding for closer collaboration in the low-cost housing benefiting from TOKI’s financial, technical, managerial and business model.
The Punjab delegation will have detailed meetings with the President and senior officials of TOKI, besides visiting mass housing projects and urban renewal development projects in Ankara and Istanbul.
Last Mod: 26 Ocak 2016, 11:09
Add Comment