PM Erdogan: Turkey is Kosovo and Kosovo is Turkey

We will turn this region into a garden of beautiful roses. By heart we supported the independence of Kosovo, and our support to Kosovo will continue, said Turkish PM addressing Kosovo citizens in Prizren. 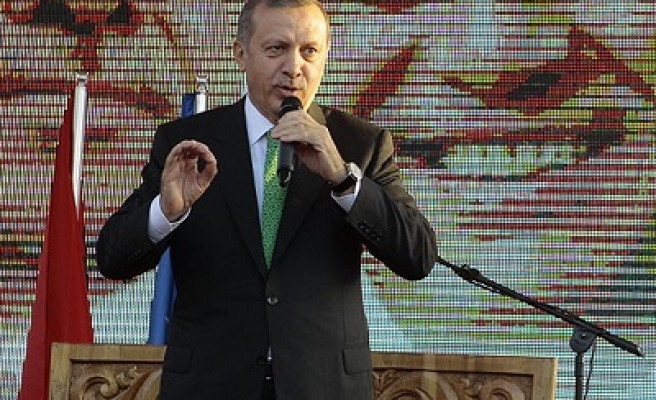 Turkish PM Recep Tayyin Erdogan is in his formal visit to Kosovo on Wednesday.

Addressing Kosovo citizens at the main square of Prizren town, Erdogan said that Turkey is Kosovo and Kosovo is Turkey.

"Turkey is Kosovo and Kosovo is Turkey. We are that much close that Kosovo citizen from Pec wrote the text of our national anthem," said Erdogan.

He added that Kosovo and Turkish people have same history and civilization and that it should not be forgotten.

“My family, I and ministers of my delegation feel like at home. Today I greet all Albanians, Bosnians, Turks and Gorans,” he said.

Erdogan stressed the importance of building a mutual future.

“We will build our future together, same as our grandfathers, our ancestors did. We lived here as brothers for centuries and we will continue so,” said Erdogan.

He pointed out that Turkey will not have any understanding for any bloodshed in the Balkan in future.

“We want domination of peace and stability in this region.”

“Past is in the past”, said Erdogan, “we will not look into the past. We will look into our common future.”

“Those who want the stability will work jointly in creating a better future, as here in this place where we are now, so in Bosnia, Macedonia and entire region.”

Referring to the situation in Syria, he said: “Look, 110,000 lives were taken. Why? Who profited? Imperialists. Who lost? Human.”

Erdogan said that he wants to see Balkans in peace and added that Turkey in that sense has historical experience, as well as political determination.

“We will not point out the differences but communion. We will turn this region into a garden of beautiful roses. By heart we supported the independence of Kosovo, and our support to Kosovo will continue. We will be strong and united as brothers.”

Erdogan said that all Turkey greets citizens of Kosovo. He reminded on recent speech of Albanian PM Edi Rama who said that in Turkey he saw all religious monuments in one place.

“Our cities have always been symbols of communion. Prizren can serve as an example of it,” said Erdogan.

Kosovo is Europe, never will be turkey or serbia.