Ahmed said Western countries did not assume the role expected from them. 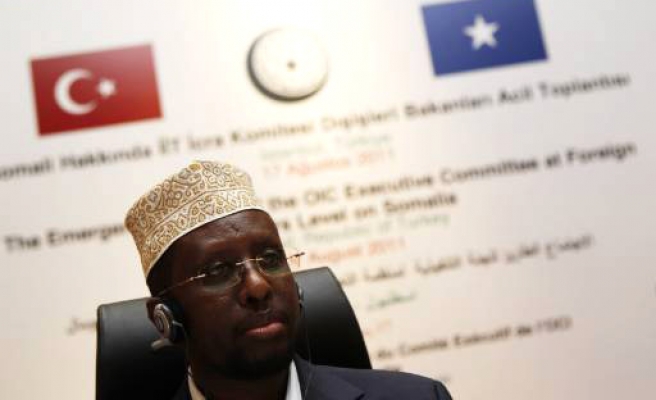 Sheikh Ahmed, who came to Turkey to attend Organization of Islamic Cooperation (OIC) meeting, responded to the questions of A.A correspondent.

Somali president said Erdogan's visit would not only display determination and will of Turkish people and government to stand side by side with their brothers and sisters in Somalia but also underline the problem and how assistance could be made to Somalia.

Sheikh Ahmed said OIC meeting was important as participating countries were of the same opinion to extend assistance to Somalia and made several commitments, noting that Turkey's president, prime minister and people assumed the leading role on the issue.

Sheikh Ahmed said not only the countries that were friends of Somalia but also all the Islamic countries noticed the difficulty of the situation in Somalia and started to take action to assist Somalia in the summit.

Asked to comment on the stance of the developed countries against the difficulties, Sheikh Ahmed said they believed Western countries would notice the role of Turkey and some Islamic countries and start to make contribution.

Somali president said he wanted to relay the message to the world that children and defenseless people died in the 21st century. "Somalia expects particularly the West to play a more influential role in prevention of the problems," he said.

Somali president said Turkey and Somalia did not only have Islamic but at the same time historical and cultural ties.

Sheikh Ahmed said there were things to be made in the long term for solution of the famine in his country. He said Somalia was not a poor country, noting, "we have many resources. Our target is to restore stability regarding current situation. However, we are of course looking at future. We want to focus on boosting agriculture and stock breeding. We want to use all natural resources we possess and take measures that can build future with a sustainable economy. I would like to relay to international community the message that Somalia's problem does not stem from the current famine. Somalia has been living in environment of non-confidence in the past 20 years. This environment played an important role in actual problems."

He said international community did not assume responsibility in solution of those problems and the current situation to some extent stemmed from it, "We hope it would end and Somalia could move forward a promising future from now on," he underlined.

Meanwhile, Turkish Foreign Minister Ahmet Davutoglu on Wednesday called on humanitarian aid organizations to use their resources to help Somalia fight drought and famine, which he said was the worst in 60 years.

"All humanitarian aid organizations must mobilize their capabilities to help Somali people. There is a need for urgent action and intensified efforts," Davutoglu told an emergency meeting of the OIC Executive Committee in Istanbul on Somalia famine.

Davutoglu said Turkish donations for Somalia had so far totaled 150 million USD, adding that they were expected to reach 250 million USD before the end of the Islamic month of Ramadan.

"Turkish government and the Turkish people cannot remain indifferent to the humanitarian tragedy in Somalia. Turkish people shows great solidarity and the amount of donations will rise," Davutoglu said.

Davutoglu said the Turkish government also coordinated OIC members' aid efforts, adding that a total of 150 thousand tones of food supplies had been shipped to Somalia in cooperation with the Turkish Health Ministry and the Turkish Red Crescent Aid Society.