'We’ve decided to act together in order to bring stability to the region,' says Iranian first vice president 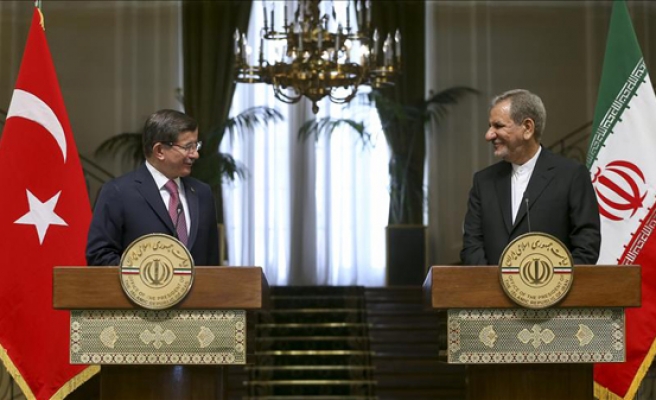 Turkey, Iran have agreed on Saturday to act together to bring stability to the region in spite of certain divisions between the two countries.

“It is very important that Iran and Turkey develop certain joint perspectives in order to bring an end to ethnic and sectarian conflicts in our region,” Turkish Prime Minister Ahmet Davutoglu told press members during his visit in Tehran.

Davutoglu visited the country as a prime minister for the first time. It is the first visit of a Turkish premier within the last two years.

The visit also comes about a month-and-a-half after the U.S. and the EU announced the lifting of international sanctions on Iran following the International Atomic Energy Agency’s declaration that the country was complying with its nuclear-related obligations agreed upon last summer.

Speaking at a joint press conference with Iranian First Vice President Eshaq Jahangiri at Saadabad Palace, Davutoglu said: “We cannot leave the destiny of our region to extraterritorial actors.”

“We were standing together with Iran during its hard times and our further cooperation with Iran will be for the benefit of the both countries and the region,” he added.

He also pointed to a new era in relations after the recent Iranian elections.

Eshaq Jahangiri also mentioned his country's will to cooperate with Turkey to end conflicts in the region.

“Even though we have some different views in some fields, we also have common views in many fields. We’ve decided to act together in order to bring stability to the region,” Jahangiri told the media.

Ankara and Tehran see developments in Syria and Iraq from a different perspective. Tehran supports the Bashar al-Assad regime in Syria while Ankara believes the Syrian president should step down as soon as possible.

“Iran and Turkey have always had good neighborly relations. These relations have gained strength during the [Justice and Development] AK Party era,” the first vice president said.

Davutoglu’s visit bears the potential to be a turning point in terms of bilateral ties, he added.

Turkey and Iran share a 650-kilometer (404 miles) long border, which has remained unchanged for the past three centuries.

The vice president also noted: “We aim to reach $30 billion of trade volume between the two countries."

Stating that 2 million Iranians were going to Turkey for tourism reasons annually, he also called on Turkey to invest in the Iranian tourism industry.

During his visit, Davutoglu is also scheduled to meet Iranian President Hassan Rouhani.