Turkey has close historical, cultural, economic and political relations with many European countries, which are important for Turkey as they are its gateway to continental Europe. Turkey has close historical, cultural, economic and political relations with many European countries, which are important for Turkey as they are its gateway to continental Europe. In the past few years historic Turkey-Europe relations have witnessed a new swing in the wake of Turkey’s assertive foreign policy in the region. Major European countries are now in a difficult situation as to how to manage their bilateral relations with Turkey at a time when the European Union (EU) is gradually losing its prestige and Turkey is strengthening its position in places of interest in Asia and Africa for major European powers. Europe’s former colonial powers are particularly worried.

The main source of friction emanates from Turkey’s independent foreign policy towards the regions where the former European colonial powers have traditionally maintained formidable influence even after their colonial rule had ended. In September 2016 Turkey launched its first cross-border military operation in Syria named Operation Euphrates Shield and in June 2017 fast-tracked troop deployment to its military base in Qatar to thwart the coup attempt by Saudi Arabia, United Arab Emirates (UAE) and Egypt. In January 2020 Turkey made a military deployment in Libya to prevent the fall of Tripoli to the French-supported warlord Khalifa Haftar’s militia. Turkey has also conducted three more military operations in Syria, maintains a military base in Somalia, and has signed military cooperation agreements with Kuwait and a maritime deal with the Libyan Government of National Accord.

The Tripoli operation displayed Turkey’s capacity to successfully conduct distant military operations assisted with modern technology. Its assertive posture created uneasiness in major European capitals, in particular Paris, which see it as a challenge to their influence in the Middle East and North Africa region and as well as their future designs. France, which commands heavy military and economic presence in many Middle Eastern, North African and Central African countries, is growing more concerned with Turkey’s rise. After frictions in Syria and Libya, it is likely that next Turkey-France tensions will emerge in Sahel and Central Africa, where France has been single-handily calling the shots unhindered. Now Turkey with this pace of assertiveness will soon foray into theses conflict zones of Sahel and Central African region.

France and Germany, the two major European powers that have adopted a unison policy on Turkey where they keep Turkey on tenterhooks through their repeated criticism of Turkish policies in Syria, Libya, the Eastern Mediterranean and block Turkey’s accession to the EU. Turkey’s ties with Austria soured due to Austrian restrictions on Turkish politicians who wanted to campaign in the country ahead of the constitutional referendum in Turkey. The Netherlands also barred the aircraft of Turkish foreign minister Mevlut Çavuşoglu from landing, and expelled Turkish Minister of Family and Social welfare Fatma Betül Kaya from the country when the two tried to speak at rallies for the 2017 Turkish constitutional referendum. In response, Turkey expelled the Dutch ambassador from the country. Turkey heavily criticised a January court decision in Belgium, which has blocked the prosecution of 36 suspects linked to the Kurdish Workers Party (PKK) declaring that it was not a terrorist organisation.

Turkey’s maritime boundary disputes with Greece and the divided Island of Cyprus are the two major disputes that directly involve two NATO member countries and result in friction with many European countries. Treatment of Syrian refugees by Greek authorities migrating to Europe via Greece is also causing tensions. The issue of Turkish minorities in Greece is another problem that hinders good relations between the two neighbours.

So France, Germany, Austria, Belgium, Netherlands and Greece are the countries in Europe which are at odds with Turkey. Turkey is exasperated with many European countries that ignore Turkey’s national security concerns. Many members of the PKK, a designated terrorist group by the US, the EU and Turkey, have found a haven in many European capitals from where they target Turkey. The same countries are now allowing activities of the FETO terrorist organisation, blamed for the 2016 coup attempt, on their soil.

The post-Brexit United Kingdom (UK) has taken a different route in maintaining bilateral relations with Turkey. At a time when most of the major European countries imposed an arms embargo on Turkey, both the UK and Turkey are enhancing cooperation in business, trade and economy and also cooperating in the defence sector. Britain’s Rolls-Royce and BAE Systems are partners in the development of Turkey’s fifth-generation fighter aircraft project. The EU’s third and fourth largest economies, Italy and Spain seem more inclined to maintaining amicable trade, commerce and strategic relations with Turkey. The two successful major defence cooperation agreements of Turkey are with Italy on the T-129 attack helicopter project and Navantia shipyard of Spain on Turkey’s first amphibious ship cum light aircraft carrier named TCG Anadolu.

To counter intermittent frictions with major European powers on many geopolitical issues, Turkey has started focussing on small Balkan and Eastern European states with enhanced trade, defence and cultural ties. A lot of Turkish aid, assistance and investment goes to former Yugoslavia republics of Serbia, Bosnia and Herzegovina, Kosovo, Montenegro and Northern Macedonia. Albania and Ukraine are also the two countries that have deepened their ties with Turkey. On the other hand, Turkey has been expanding relations with Hungary allowing it observer status within the Turkic Council.

Turkey has been proactive in helping the Covid-19 pandemic-affected European countries and also displayed its readiness in quickly supplying medical help on specific requests. Italy, Spain and the UK — the three hardest hit countries by Covid-19 — received a lot of urgent Turkish medical help. According DI global humanitarian assistance report 2019 Turkey spent $8.4 billion in humanitarian assistance in 2018 and its share was 29 per cent of all international humanitarian aid from the global total of $28.9 billion, far ahead of Europe’s largest economy Germany, which ranked third with $2.96 billion. Turkey’s massive aid mobilization in the wake of Covid-19 outbreak is set to increase its share in global humanitarian assistance in 2020 and further raise its profile internationally.

While the diplomatic outreach may have brought a change of tone to some of Ankara’s troubled international relations in continental Europe, the lasting results would be possible only when major European powers address fundamental insecurities of Turkey such as the outcome of civil wars in Syria and Libya, the Syrian refugee crisis, treatment to PKK and FETO terrorist activities on European soil and Turkey and Northern Cyprus securing their rights of gas exploration in the Eastern Mediterranean.

Turkey has its own security goals in its expanding areas of influence and some growing economic objectives. Turkey’s goal is to become a leading country representing the Muslim world. To counter the brinkmanship of some European countries, Turkey has started developing a multi-faceted foreign policy by enhancing relations with Russia and China. Although Turkey has invested a lot in its relationship with Russia, developing big ticket deals like the Turkstream gas pipeline, Akkuyu nuclear power plant, S-400 air defence deal, it is a competitor to Moscow in Syria, Libya, Caucasus, the Balkans and the Black Sea region. Therefore, cementing a long-term relationship with Russia is a difficult job.

Turkey is looking for permanent friends in Europe who can be trusted and relied upon in the time of crisis. Britain has the potential to be one, and Italy and Spain are seen by Turkey as reliable partners. France and Germany are considered as highly unreliable in Turkey. France is peculiarly missing from Turkey’s medical help list and Germany requested Ankara not to highlight its mask donation to the regional government in Germany. Turkey wants European countries not to endanger its security and do not undertake interventions in its proximity. Africa is another region where competition is growing between Turkey and European countries. France sees Africa as its monopoly. Turkey’s long-term goal is to become self-reliant in critical areas. To achieve that, Turkey’s foreign policy is no longer one dimensional towards Europe. 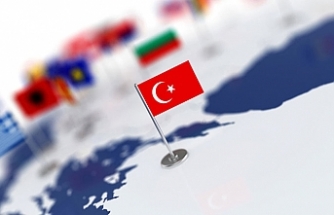