Turkey has sent 8 planes and 4 ships of humanitarian relief supplies to famine-stricken Somalia. 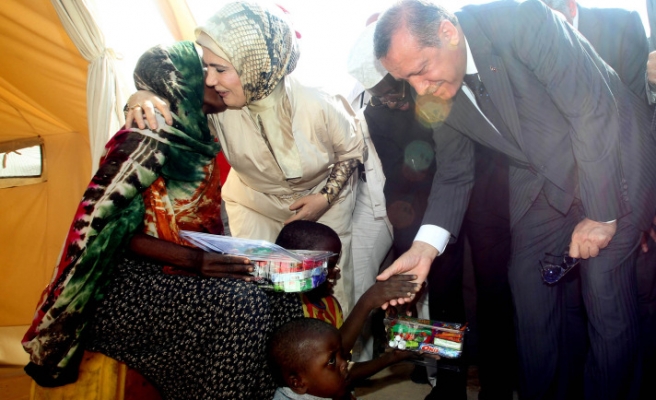 Somali diaspora in the Netherlands gave a thank-you plaque to Turkish embassy official to be submitted to Turkish Prime Minister Recep Tayyip Erdogan.

At a gathering in The Hague, Somali diaspora gave the plaque to the third-secretary Muammer Hakan Cengiz at Turkish embassy in The Hague to be presented to Erdogan due to his efforts for Somali people suffering from famine.

Cengiz said that Turkey always supported Somali people during their tough days and Prime Minister Erdogan's visit to this country was a historic one.

Turkey's efforts were appreciated and backed by the world, he said.

Gulet Ahmet, spokesperson of Somali diaspora in the Netherlands, said that they were pleased with Turkey's and Erdogan's efforts for Somalia and appreciated these efforts.

Ahmet said that Erdogan paid a visit to Somalia and this visit was of historic importance. "His visit drew attention of the world to Somalia. We thank Turkish people and PM Erdogan for their contributions," he added.

Turkey has sent 8 planes and 4 ships of humanitarian relief supplies to famine-stricken Somalia.