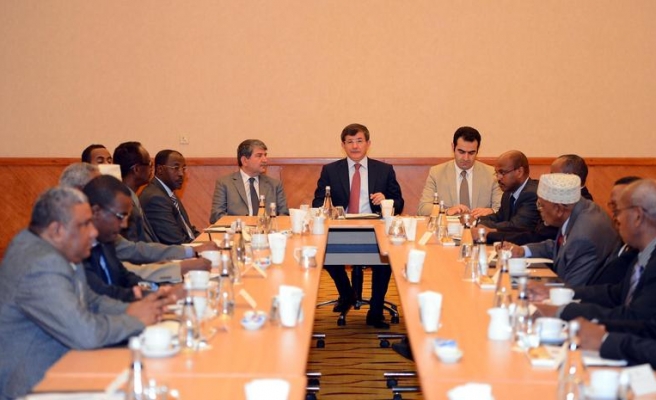 Helping Somalis "in every possible way" is a "historic responsibility" for Turkey, said Foreign Minister Ahmet Davutoglu on Saturday.

Davutoglu held a joint meeting with delegations of government officials from Somalia and Somaliland in central Istanbul in a continuation of peace talks that began on April 13 in Ankara.

"The relations between Somali, Somaliland and Turkey are beyond any kind of borders," Davutoglu said. "Despite geographical distance, historically we are like a family."

The minister described the first meeting on April 13 as a "historic start", where parties agreed on a joint statement to plan future talks. The statement had said country representatives would meet again in three months.

"We have always kept discussions on the joint future of our brothers [in Somali and Somaliland] on our agenda, and striven to build strong bridges between them through humanitarian aid," Davutoglu said. "Irrespective of which country they live in, we will help all our Somali brothers and sisters in every possible way."

"This is our historic responsibility, as well as a humanitarian responsibility and an indispensable part of our active diplomatic policy in Africa."

Somaliland is an internationally recognized autonomous region in northwestern Somalia. It sought independence from the country in 1991 when Somalia suffered a government collapse, triggering a civil war that is still ongoing.

What were the events that lead to conflict that created Somaliland and destroyed Somalia. What were the building blocks of Somali Republic. What was the historic difference of the two. How are they different now.

Thank you for this interesting read!It's a about time the relations of these two states that once had formed a union and collapsed move forward. Turkeys knows the strategic location of these two states and Turkey is doing a fantastic job in championing peace and progress for the people's concerned. The bottom line is Somalia is union of two states and both countries will separate.

That unity was never doomed, stop your propaganda, SOME people from the North always accuse the Southerners of genocide, but conveniently forget the Role SNM in bringing about the collapse of the Somali state. Somalia is ONE state not two