Turkey has begun temporarily holding thousands of Syrians on the Syrian side of the border as it struggles to cope with a growing wave of refugees. 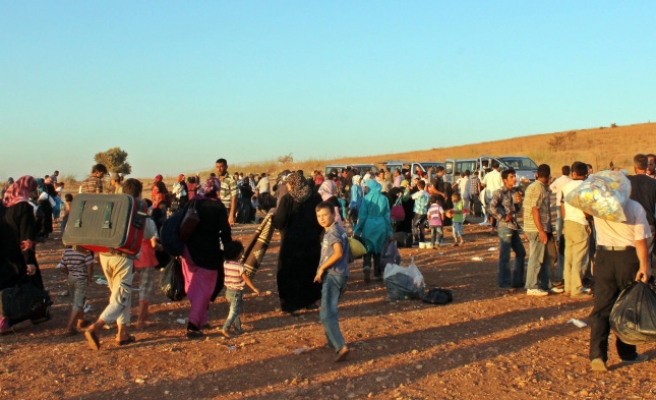 Turkey has begun temporarily holding thousands of Syrians on the Syrian side of the border as it struggles to cope with a growing wave of refugees.

At least 2,000 people fleeing violence in Syria were prevented from entering Turkey overnight at one of several unofficial border crossings in the southern province of Hatay, a Turkish official and witnesses said.

"We have run out of space to house these people. We are working to make shelters and when these are completed we will allow these people across," the official told Reuters on condition of anonymity.

He said the refugees were being handed food and humanitarian aid through the barbed-wire fence that marks much of Turkey's 900-km (560-mile) border with Syria, and through which tens of thousands of Syrians have scrambled over the past 17 months.

The official said he hoped the refugees would be allowed to cross later on Sunday.

The number of Syrian refugees in Turkey has nearly doubled over the past two months to more than 80,000 and Ankara has already said it is struggling to cope.

Foreign Minister Ahmet Davutoglu said this week Turkey could run out of space if the number went above 100,000 and suggested the United Nations may need to create a "safe zone" inside Syria.

In total, more than 200,000 Syrians have poured into neighbouring countries since the start of the conflict, already surpassing a U.N. year-end estimate of 185,000, and Turkey, which has seen the highest refugee influx, is growing frustrated at what it sees as a slow international response.

"The United Nations and others are commending Turkey and neighbouring countries for doing a good job housing the refugees but all these comments are actually covering up a crisis," a second Turkish official told Reuters.zz

"Our capabilities as a host country are being strained ... we are now struggling to cope," said the official, who declined to be named so he could speak freely on the subject.

He said while several countries had provided some humanitarian aid such as blankets and tents, the overall response had been slow. He said despite pledges being made, Turkey had so far not received any financial assistance.

Many of the latest arrivals have been housed in schools and sports centres but, with the academic term due to begin in a matter of weeks, this is not a permanent solution.

Turkey is rushing to build several new camps but refugees are arriving faster than they can be constructed. This has led to overcrowding, causing disturbances in some camps as tempers, exacerbated by blazing summer temperatures, flare over shortages of food and water.

Officials also say the real number of Syrians that have fled their homes over the past 17 months is higher than the official figures as thousands of wealthier refugees have arrived across official borders and are renting accommodation in cities.

Ankara fears a mass influx on the scale seen during the 1991 Gulf War when 500,000 people poured into Turkey, and says that would be one factor that could drive Turkey to establish a "buffer zone" inside Syria.

But Ankara is reluctant to act unilaterally on what would essentially amount to a military intervention.

The idea of a buffer zone has also gained little traction elsewhere and Ankara has been increasingly vocal in its frustration at the U.N. Security Council and its failure to come to a united stance over Syria.

Prime Minister Tayyip Erdogan has said the Security Council's failure was indirectly supporting oppression in Syria, and criticised vetoes by China and Russia of U.N. resolutions as a "fiasco".