A Turkish vessel is also scheduled to set sail to Somalia next week to carry 5 thousand tons of food and medical aid. 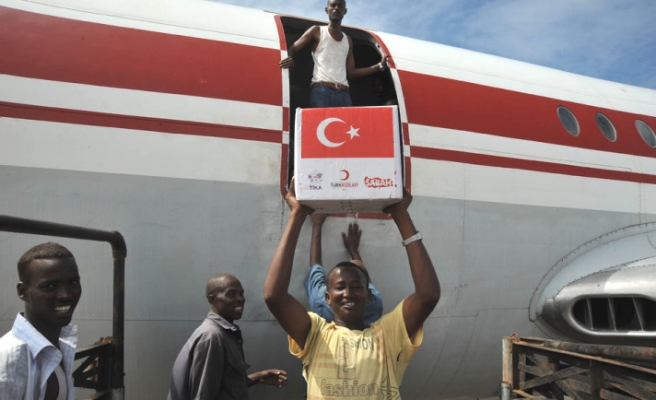 The plane is carrying 40 tons of food and medical supplies to drought-stricken Somalia.

The aid, which includes baby formula and milk powder as well as medication to cure most common diseases in Somalia, will be distributed by representatives from TIKA and Red Crescent in Mogadishu.

First two planes carrying aid to Somalia departed Monday with 50 tons of food and medical supplies on board.

A Turkish vessel is also scheduled to set sail to Somalia next week to carry 5 thousand tons of food and medical aid.

Ten tons of medicine, which were gathered within the scope of a relief campaign for drought-stricken Somalia, were delivered to Somali Health Ministry officials on Wednesday.

Earlier today, Turkish Prime Minister Recep Tayyip Erdogan said that he was set to pay a visit to Somalia where tens of thousands of people are suffering drought and famine and head for refugee camps in Kenya and Ethiopia in search of food and water.

The U.N. Children's Fund estimates that more than 2 million children are malnourished and in need of lifesaving action in the region.