Turkey and Greece agree on reciprocal visit over Cyprus issue 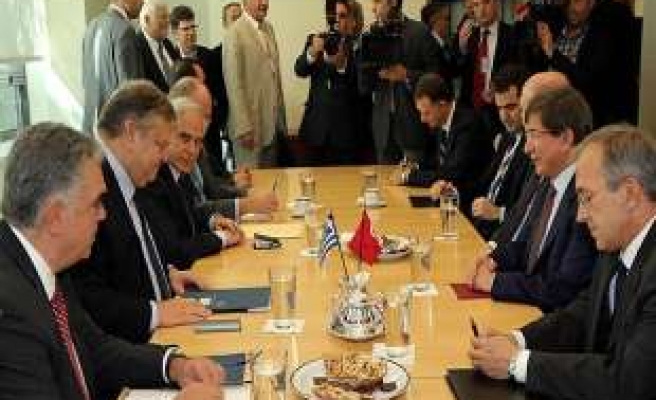 Turkey and Greece agreed on the reciprocal visit of representatives from Turkish Republic of Northern Cyprus (TRNC) and Greek Cypriot administration to both countries over the solution in Cyprus.

Two leaders discussed regional issues covering developments in Syria and Egypt as well as bilateral relations including cooperation in trade, tourism, and fight against terrorism.

Leaders also voiced their demand over the immediate start and result of the negotiations for solution in Cyprus.

In 1960, a partnership state between Turkish and Greek Cypriots was set up in accordance with the international agreements signed by the Turkish Cypriot and Greek Cypriot sides, as well as the Turkish, Greek and British governments. However, in 1963, only three years later, the Turkish Cypriots were ousted by force from all organs of the new Republic by their Greek Cypriot partners in clear breach of the founding agreements and the Constitution.  The claim put forth thereafter by the Greek Cypriots to represent the “Republic of Cyprus” has been illegal, and has not been recognised by Turkey. The 1974 attempt by Greece to annex the Island, through a coup attempt, was resisted by Turkey in accordance with the 1960 Treaty of Guarantee. Consequently, Turkish Cypriots set up their own Republic, while continuing the search for reconciliation.

Cyprus is the home of two nations and there exist two democratically organised states in the island. Turkish side always supported the efforts carried out under the good offices mission of the United Nations Secretary-General towards finding a just and viable settlement to the Cyprus issue. However, the Greek Cypriot side rejected the 1985-86 Draft Framework Agreements, the UN sponsored Set of Ideas of 1992, the package of Confidence Building Measures of 1994 and more recently the Comprehensive Settlement of the Cyprus Problem (Annan Plan) in April 2004.

Two parties are now trying to reach a negotiated settlement in the island.