Davutoglu made a fresh call on Wednesday for Syria to halt military operations in a crackdown on widespread demonstrations calling for the overthrow of President Bashar al-Assad. 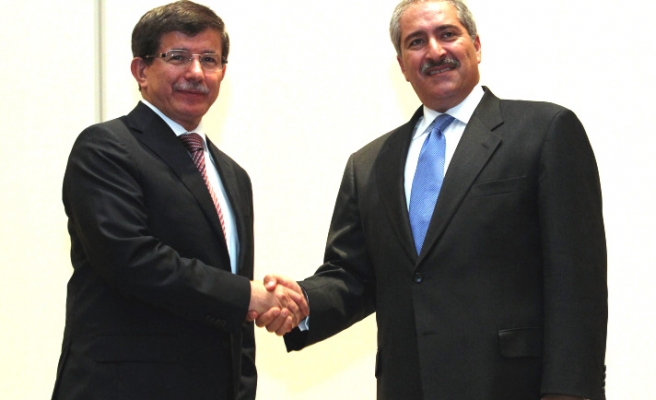 Turkish Foreign Minister Ahmet Davutoglu made a fresh call on Wednesday for Syria to halt military operations in a crackdown on widespread demonstrations calling for the overthrow of President Bashar al-Assad.

Turkish leaders, who once backed Assad, are sounding increasingly frustrated at the Syrian leader's fierce crackdown on demonstrators demanding an end to his 11 years in power.

Davutoglu's latest comments came after he ruled out on Tuesday foreign intervention in its southern neighbour after Syrian tanks fired on areas of the port city of Latakia on Tuesday in an assault which has killed 36 people.

"The bloodshed has to stop, first and foremost. The military operations have to stop," Davutoglu told a news conference with his Jordanian counterpart Nasser Judeh.

Asked about a news report that Turkey might create a buffer zone along its border with Syria, Davutoglu said there was currently no such development.

"We're talking about a border that is 900 km long. We cannot talk about such a development right now," he said.

Turkish officials denied on Tuesday the news report that Ankara was planning a buffer zone to prevent an influx of refugees.

With Assad defying international pressure and Syrian refugees crossing over the border into Turkey, media have previously reported that Turkish political and military leaders were considering setting up a buffer zone inside Syria.

Davutoglu urged Assad on Monday to end military operations against civilians immediately and unconditionally, saying this was Ankara's "final word".