Prime Minister Erdogan will pay a visit to Pakistan after the referendum in Turkey on September 12," Turkish Minister said. 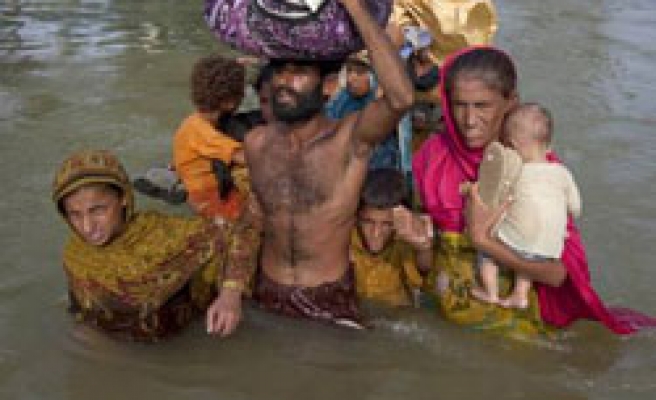 Turkish State Minister & chief negotiator for the EU talks Egemen Bagis said Thursday that Turkey would do its utmost to assist flood-stricken Pakistan.

Bagis said at a high-level meeting of the 192-member UN General Assembly, "the disaster in Pakistan is one of the most destructive calamities in the history of the humanity. The destruction it caused has already reached unimaginable dimensions. Such disasters can easily lead to social and political uprisings and give rise to security issues. Therefore, it is our common responsibility to put an end to the misery of Pakistani people."

"Turkey has always attached great importance to prosperity and stability of Pakistan. There have been unique relations between Turkish and Pakistani peoples throughout their history. We have sent 140 tons of humanitarian aid worth more than 2 million USD to Pakistani people so far. The aid included foodstuff, tents, blankets and the other relief equipment. Turkey also sent a financial aid of 10 million USD to meet urgent requirements of the flood survivors. Also, the Turkish army will send medical equipment to Pakistan by two cargo planes," he said.

"The Turkish relief agency, the Red Crescent, was one of the first international groups rushing assistance of Pakistani people. The Red Crescent team distributed aid material to flood survivors in coordination with the local authorities. We are also building two field hospitals. These hospitals will begin serving flood survivors on Saturday. The Turkish business world has also mobilized for Pakistan. The Union of Turkish Chambers and Commodity Exchanges donated 1 million USD," he said.

"The aid to Pakistan should be a long-term and well-coordinated one since problems will emerge after flood waters begin to flow away. The international community should assist Pakistan till everything returns to normal since the region, the continent and the world cannot bear another instability," he said.

He also read out a message of Prime Minister Recep Tayyip Erdogan who expressed profound sorrow over loss of many lives: "Pakistan has faced the most destructive disaster in its history. All countries have a humanitarian responsibility in taking action in unity and solidarity in the face of the disaster in Pakistan and in disasters in the other part of the world. Today is the day to give Pakistan a helping hand. Turkey and Turkish people will not leave Pakistan alone in this difficult period. We will do everything in our power to heal the wounds of Pakistani people."

Following the meeting, Bagis told the A.A, "I held a series of talks with the participating ministers including Pakistani Foreign Minister Makhdoom Shah Mehmood Qureshi and Deputy Prime Minister & Foreign Minister Steven Vanackere of Belgium. I asked Vanackere to encourage the EU-member states to give a helping hand to Pakistan as the current president of the European Union. The United States pledged to send 150 million USD."

"I said that Turkey was ready to host aid conferences henceforth. Also, Prime Minister Erdogan will pay a visit to Pakistan after the referendum in Turkey on September 12," Bagis added.

In his address to the meeting UN Secretary General Ban Ki-Moon said the flood in Pakistan was a global disaster, one requiring global solidarity to cope with.
Ki-Moon said around 15 to 20 million people needed shelter, food and urgent care in Pakistan.

Floods triggered by heavy monsoon rain have scoured Pakistan's Indus river basin, killing more than 2,000 people, forcing 6 million from their homes and disrupting the lives of about 20 million people.