Turkey calls for more efforts to stability in Asian countries

Turkey's President Gul said that Turkey was determined to exert efforts for a sustainable peace in the Caucasus. 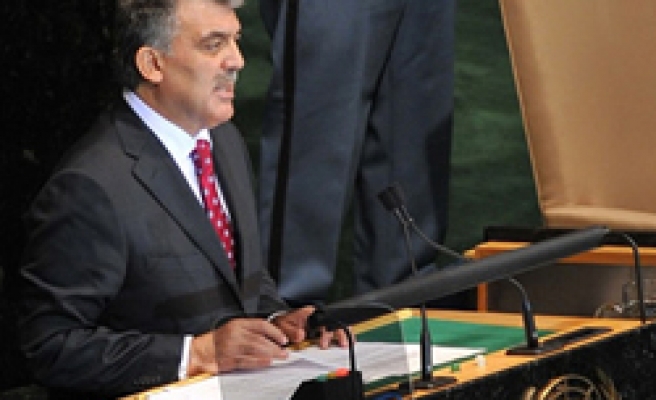 Turkey's President Abdullah Gul said on Thursday that Turkey was determined to exert efforts for a sustainable peace in the Caucasus.

Speaking at the UN General Assembly meeting in New York, Gul said, "for the Caucasus, we remain committed to pursuing our efforts in search of a comprehensive and sustainable peace in the region while respecting the principle of territorial integrity."

"In recent years, we all witnessed how frozen conflicts could easily turn into active clashes in the region. In this context, we attach particular importance to the peaceful resolution of the Upper Karabakh conflict," he said.

Noting that Central Asia was a strategic region of Eurasia, Gul said that Turkey was committed to contributing to the stability, peace and development in Central Asia.

"The recent events in Kyrgyzstan have been of special concern. We are implementing an action plan in order to strengthen the efforts for stability and reconciliation in Kyrgyzstan. We believe it is our common responsibility to assist Kyrgyzstan during this transitional stage toward the establishment of a sound democratic system," he said.

Gul noted, "building trust and a sense of solidarity is essential to successfully dealing with complex regional issues. In our view, the Conference on Interaction and Confidence Building Measures in Asia (CICA) can be an effective tool to that end. Our two-year term chairmanship of CICA, which started last June, will be guided by this conviction."

Regarding Afghanistan, Gul said, "our failure in Afghanistan will certainly have unpredictable consequences for the international community. Therefore, Afghanistan deserves our close attention and sincere commitment."

"Afghanistan is going through a historic process of transformation. As military operations continue, there must be a simultaneous and growing emphasis on civilian efforts," said Gul, adding, "Turkey's commitment to Afghanistan is open-ended. We will continue our assistance as long as the Afghans require it. We firmly believe that an essential pillar of ensuring the irreversibility of the processes under way in Afghanistan is directly linked to ensuring better, result-oriented cooperation at the regional level, particularly between Afghanistan and its neighbors."

Regarding Pakistan, Gul said, "supporting Pakistan's democracy is also of singular importance not only in itself but also for the stability of the region as a whole. In the wake of the terrible disaster caused by the floods, it is critically important to support the people and the democratic government of Pakistan to heal their wounds."

Gul also said, "in view of the growing economic and political significance of the Asia-Pacific region, Turkey has adopted a new approach in its relations with the countries of the region. Accordingly, we launched an action plan called 'opening up to the South Asian, Far Eastern and the Pacific countries'."

"Turkey has recently taken a significant step towards deepening its cooperation with the regional countries. In the 43rd ASEAN Ministerial Meeting, Turkey became a party to the Treaty of Amity and Cooperation in Southeast Asia. This is the first institutional tie between Turkey and ASEAN. This development paves the way for Turkey to improve its relations with both ASEAN and Member States," he said.

Gul noted, "Turkey also attaches importance to the security and stability of the Korean Peninsula. We are aware that instability in the Peninsula has ramifications beyond the region itself. Therefore, we call on all the relevant parties to settle the existing problems through peaceful means and refrain from actions or attitudes which might threaten the security of the region."

Gul said, "Turkey places great value on deepening and expanding its relations with the Latin American and Caribbean region. The policy that Turkey has been pursuing for a number of years to open up to this region is gaining greater momentum with each passing year."

Turkey also aspires to strengthen its ties with the regional cooperation schemes in this area, he said, adding, "within that context, Turkey enjoys permanent observer status in the Organization of American States and the Association of Caribbean States, and seeks to develop formal ties with the Southern Common Market (MERCOSUR) and the Caribbean Community (CARICOM)."