Turkey calls for necessary political will on Millenium goals

Turkish President Gul said the world must display the necessary political will in order to alleviate poverty and famine and to realize gender equality by the year 2015. 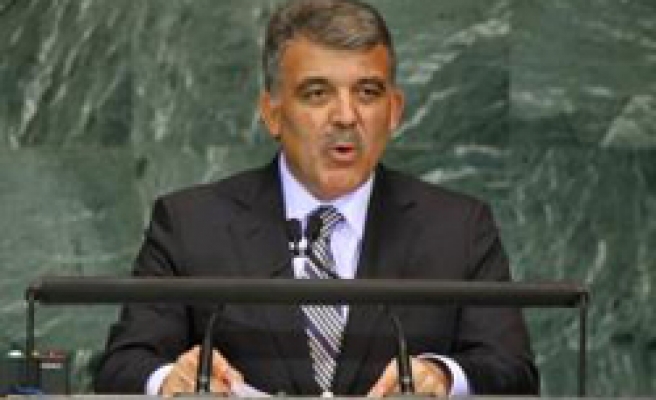 Turkish President Abdullah Gul said Monday the peoples of the world must display the necessary political will in order to alleviate poverty and famine and to realize gender equality by the year 2015.

Co-chairing a round-table meeting on combat against poverty, famine and gender inequality and organized as part of the "United Nations Millenium Development Goals Summit", Gul said that the partnership and solidarity of the global community must continue not only until 2015 but also afterwards.

Gul said the MDGs had provided a solid framework for development in the past decade, and global changes, including the economic and financial crisis and adverse impacts of climate change had made them even more pertinent.

"Five years from our deadline, there is an urgent need to reaffirm our commitment and strengthen our partnership in order to meet these Goals on time," he said.

Gul said efforts should not be limited to government activities, and countries must also rally non-governmental organizations and the private sector around a revitalized development agenda.

President Gul said countries must attach equal importance to each and every goal, and it was also crucial that the MDGs were dealt with as one holistic package in order to create synergies between all the Goals.

Gul then enumerated the guidelines he thought important to work on as:

"- Our overarching objective must remain the eradication of poverty and hunger.
- We need to adopt strategies in favor of the poor and vulnerable.
- Investment in agriculture is essential to ensure food security.
- We need to make progress on gender equality and women's empowerment.
- There should be more emphasis on education and health.
- We need to pursue environmental sustainability with stronger political commitment and action.
- We should acknowledge mutually reinforcing relations among the notions of democracy, development and security."

Gul said, "I should underline that these guidelines are drawn from Turkey's own experience in development, as an emerging economy."

President Gul went on saying that Turkey was well on its way towards achieving the MDGs, and had adopted the MDGs as its primary national development goals and integrated them in its development plans.

Gul said, "in recent years, we introduced ambitious and comprehensive social welfare programs to improve living standards of vulnerable segments of our society. Those policies have proven to be very effective and sustainable with solid financial resources to support them."

"We are on track towards reaching the hundred percent primary school enrollment ratio, thanks to the direct payments given to mothers to promote the enrollment of girls to school," the president said.

"We also granted extensive scholarship programs to students with limited financial means, in all levels of education. We took all measures to contain HIV and provided access to treatment for those who need it. In recent years, more than five hundred thousand new houses have been built by the state-owned Housing Development Administration. Comprehensive measures and important policies have been introduced for environmental sustainability. As part of our commitment to the MDG agenda, we hosted a regional review meeting in Istanbul last June, in cooperation with UNDP and UNECE (United Nations Economic Commission for Europe). The conclusions of that review provided significant input to this High Level Plenary Meeting," Gul said.

"As a reliable partner in development, our focus is particularly on the least developed countries (LDC). In order to deliver our pledge to the LDC's, we increased our Official Development Assistance in recent years. With the contribution of Turkish NGOs, our overall development assistance exceeds one and a half billion dollars annually," Gul said.

Gul said in 2007, he, as the then foreign minister and deputy prime minister, had the pleasure and privilege of hosting his counterparts from the least developed countries in Istanbul for the UN Ministerial Conference on the LDCs.

"Once again, we feel privileged to host the 4th United Nations Conference on the LDCs next year," Gul said.

Gul said he hoped that this meeting would generate strong political momentum and new partnerships to address the persistent challenges of the LDCs in the next decade, and he looked forward to the support of world leaders in this regard.

"While we may not have too much time left for progress towards the MDGs, we certainly have the will and capacity to achieve them. But we need to act now, and act swiftly. Let us commit here, once again, to joining our efforts in reaching our common goals. But let us not forget: Our partnership and solidarity for development must continue beyond 2015," Gul said.

Gul also said leaders must continue with a new and enhanced development agenda and it must be their pledge to future generations.