Turkish President Gul called for a Middle East free of weapons of mass destruction at the UN General Assembly meeting in New York. 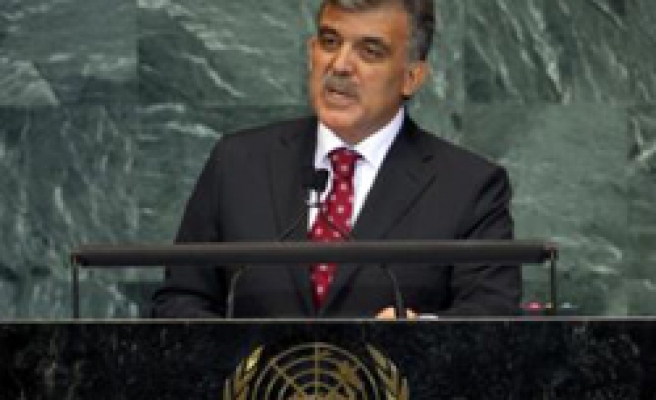 In his address to the General Assembly, Gul said proliferation of weapons of mass destruction threatened the world, noting that it could only be overcome if all countries including those who owned nuclear weapons adopted a just and principled approach.

Gul underlined that a credible global non-proliferation regime could not be established by ignoring de facto existence of nuclear weapons of certain countries at the heart of most delicate regions.

"In this context, I would like to call upon all member states to intensify their efforts in creating a 'Weapons of Mass Destruction Free Zone in the Middle East' as was envisaged by the UN Security Council Resolution 687 of 1991 and as also repeatedly called for by the General Assembly," Gul was quoted as saying.

Gul said Turkey also supported the calls made at the New York NPT Review Conference of May 2010 for holding of a conference on WMD Free Zone in the Middle East in 2012.

Referring to the international crisis over Iran's nuclear programme, Gul said the controversy could only be solved in conformity with the IAEA norms and NPT obligations but at the same time respecting the right to use nuclear energy for peaceful ends.

Gul said in this respect, the Tehran Declaration and the July gathering in Istanbul provides a window of opportunity that should not be missed pointing at diplomacy as the solution.