Turkey calls on all Libya assets to be freed

Davutoglu also called on all the world to recognize the National Transitional Council as the sole legitimate representative of Libyan people. 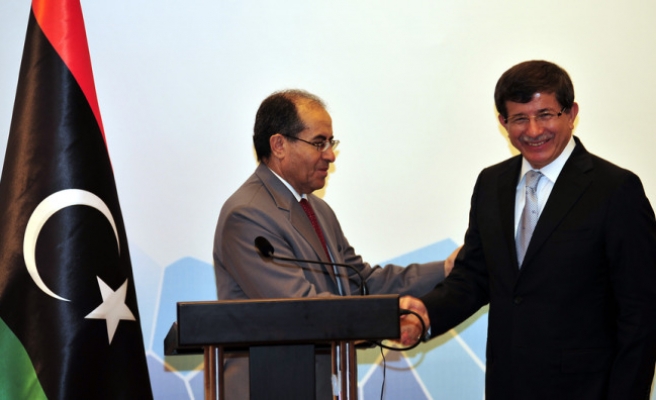 Turkish Foreign Minister Ahmet Davutoglu has called on the world to unfreeze Libyan assets after the fall of Gaddafi rule, saying, "assets of Libyan people should be given back."

Davutoglu's remarks came Friday at a press conference in Istanbul where he met Mahmoud Jibril, Chairman of the Executive Board of Libyan National Transitional Council.

"We have always stood by Libyan people's demand for a change and believed that a single authority should represent the country to avoid a split. Today, this authority is the National Transitional Council," Davutoglu reaffirmed.

Davutoglu said his meeting with Jibril discussed financial measures and decisions to meet the needs of Libyan people, adding that all frozen assets of Libya across the world should be unfrozen.

"As Turkey, we believe that assets that belong to Libyan people should be given back. We think there is no reason to keep Libyan assets frozen following diplomatic and military developments," he said.

"It must continue and all frozen assets should be released," he added.

Davutoglu also called on all the world to recognize the National Transitional Council as the sole legitimate representative of Libyan people.

In earlier efforts to help Libyan people, Turkey has given the Transitional National Council $300 million, two-thirds as a loan and one-third as a grant.

"I would like to make sure again. Turkey will stand by Libya in this transition period and exert any kind of efforts to provide humanitarian and other assistance to Libya," Davutoglu said.