Davutoglu's comments were made during an opening speech at the start of a Libya Contact Group meeting of senior diplomats in Istanbul who are discussing the next steps for the country. 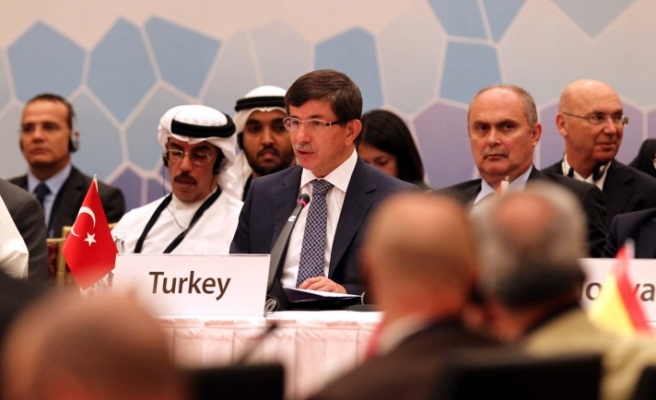 "We need to take urgent action in the United Nations for the alleviation of the needs of the National Transitional Council (NTC). We need to take action especially about the frozen assets of Libya."

Davutoglu's comments were made during an opening speech at the start of a Libya Contact Group meeting of senior diplomats in Istanbul who are discussing the next steps for the country.

World leaders and the rebel government-in-waiting have lost no time readying a handover of Libya's substantial foreign assets as funds will be required to bring relief to war-torn towns and develop oil reserves.

After talks with Arab and Western allies in Qatar on Wednesday, a senior rebel leader said the NTC would seek to have $5 billion in frozen assets released to provide vital relief to its citizens. The amount is higher than a previously given estimate of $2.5 billion.

Davutoglu also said NATO operations over Libya must continue until the country was fully secured.

"It is important for NATO to ensure continuing its operations for ensuring the security of all people. On the other hand immediate planning for post conflict is also very important," he said.

Libyan rebel forces began to purge Tripoli's streets of gunmen still loyal to Muammar Gaddafi on Thursday in the final phase of the battle for the Libyan capital.

Rebels said they were confident they could mop up diehard soldiers clinging to a leader now on the run, presumed to be in hiding in the country he ruled for four decades.

Speaking to reporters on the sidelines of the meeting in Istanbul, Libyan ambassador to the United Arab Emirates, Aref al-Nayed, said Libya would not ask for foreign troops to enter the country but would expect help from the U.N. in rebuilding an army and police force.

"The Libyan people are proud to have liberated their country with Libyan hands. We do not expect or ask for boots of any country on the ground not even the United Nations boots on the ground," al-Nayed said.

"We do expect to engage with the United Nations sooner rather than later to make sure that we build a proper national army and proper policing forces who do not serve Gaddafi but the Libyan people."