Turkey expects UN to impose pressure on Israel if no coop

Turkey's foreign minister said that all countries should respect values of the United Nations (UN). 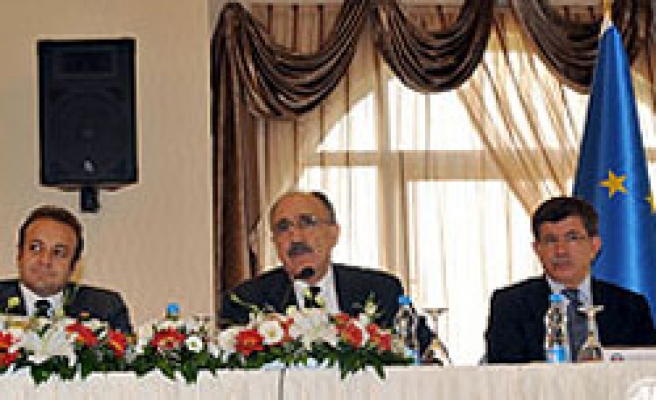 Turkey's foreign minister said on Monday that all countries should respect values of the United Nations (UN), adding Israel should cooperate with the existing commissions, as well as the commissions to be established.

Appearing at a press conference after the meeting of the Reform Monitoring Group in capital Ankara, Turkish Foreign Minister Ahmet Davutoglu replied to questions on the fight against PKK and the tripartite mechanism between Turkey-USA-Iraq.

"Freedom and security should not be put into two separate pans of the weighing scale", said Davutoglu, adding security forces took the necessary measures against the threat of PKK, however, the political will was also responsible for expanding the freedom aspect of the matter.

Davutoglu said the tripartite mechanism between Turkey-USA-Iraq was a part of the diplomatic processes of the fight against terrorism, stating diplomatic efforts should continue without any interruption.

Commenting on the developments regarding the international investigation commission to be established to assess the Israeli raid on a Gaza-bound aid flotilla, Davutoglu said Turkey had voiced some basic demands following Israel's attack that was in breach of international law.

Listing such demands as the release of passengers on board the aid ships, return of the ships to Turkey and launching of a research commission, Davutoglu said the first two demands were met, adding two commissions also joined the process as part of the third demand.

Davutoglu said, in addition to the actions taken with the UN Security Council, a human rights commission had also been established in Geneva in order to assess the human rights aspect of the problem.

"As Turkey, we are ready to carry out all kinds of cooperation with such commission. Because, this is not a bilateral matter between Turkey and Israel only," Davutoglu said.

"UN values are principles that should be respected by all countries. Within this framework, we expect Israel to cooperate with both commissions. If not, we expect the international community to impose the necessary pressure," he also noted.

Commenting on Iran's nuclear program as well, Davutoglu said, "We hope the decision to be taken by EU's foreign affairs council today does not affect the diplomatic process negatively and this important matter can be solved in a peaceful way and through diplomatic means. Turkey is determined to carry out its responsibilities on the matter".