Turkey welcomes the "Gaza Europe Convoy" which took off from Britain on September 18, that arrived in Turkish border city on Monday. 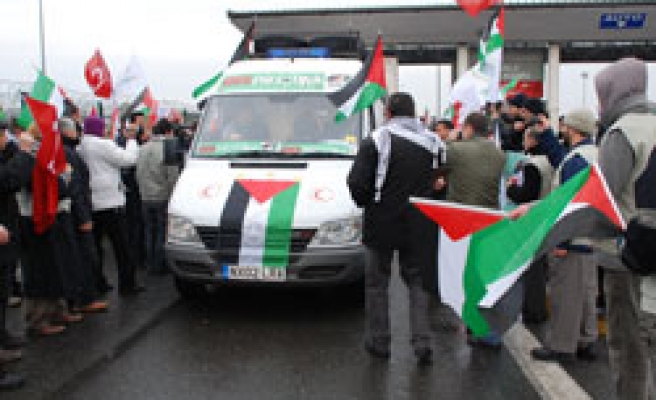 Turkey welcomes the "Gaza Europe Convoy" which took off from Britain on September 18, that arrived in Turkish border city on Monday.

The aid convoy is comprised of 45 vehicles and there are 90 participants from around 30 countries.

The Viva Palestina organisation said on its web site that the convoy left London on September 12 and passed through Lyons in France and Milan in Italy on its way to Greece where it stopped off in Salonica on Saturday.

The convoy is comprised of 45 vehicles and there are 90 participants from around 30 countries. A leading Turkish organisation, IHH, will undertake hosting the siege-breaking aid convoy.

"The goal of the convoy is to ship humanitarian assistance to Palestine and to attract the attention on the ongoing humanitarian tragedy there," Ahmet Emin Dag, the Deputy Chairman of the IHH Humanitarian Relief Foundation said.

Ron Mckay, the team leader of Gaza Europe Convoy, said they would visit the families of the nine Turks killed in Mavi Marmara ship.

Two survivors of the Mavi Marmara massacre, Nicci Enchmarch and Kevin Ovenden, are among the activists taking part.

He said they expected Egyptian government to assist them in shipping the aid to Gaza.

Earlier, Egypt said it would halt land convoys to enter Gaza and restricts the number of people who can enter at one time. It also said that George Galloway was banned from entering Egypt “under any circumstances.”

The convoy will depart from Turkey on October 1 and proceed to Syria.

The convoy will depart from Istanbul on October 1 and will follow the route toward Ankara, Kayseri, Adana, Gaziantep and Kilis to enter Syria.